Zhangqiu Duozhuang always compares itself to Wucai, especially the several mountain villages near Baizhang Cliff, which are called “Colorful Villages”. In fact, there are more than three or five beautiful mountain villages in Duozhuang Town. There are too many treasure villages hidden in Dazhai Mountain, Qixingtai Tianluoding, and Qilu Great Wall Ridge.

In order to photograph the Great Wall of Qi, Lao Jin went to Shangqiulin Village, a village in a valley with an altitude of more than 400 meters, last week, an ancient stone under the Great Wall of Qi. The village, surrounded by beautiful villages with many historical sites that cannot be circled around the village, its quietness, its beauty and simple folk customs make me “love it”. 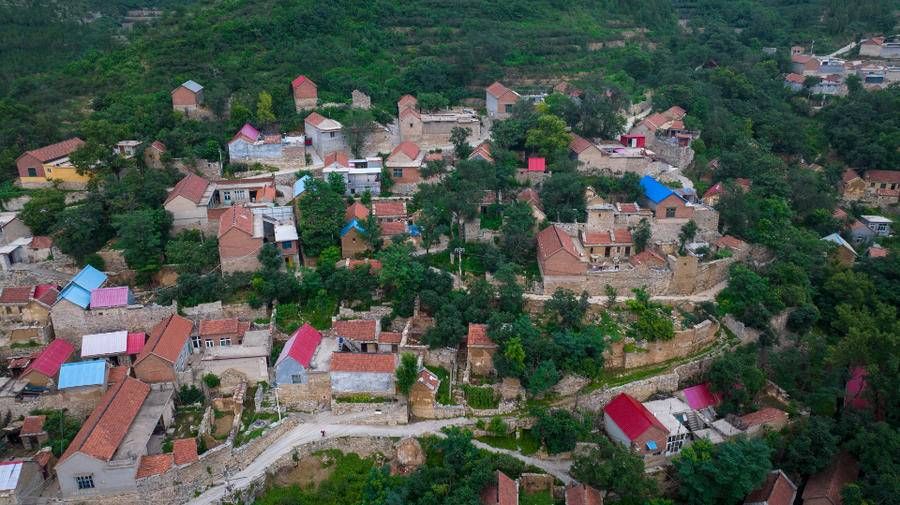 Going to Shangqiulin Village is now available for navigation, but due to the rugged and narrow mountain road and the inconspicuous fork in Or give you a detailed wiring diagram. From Jinan City, you can follow Jingshi Road or the south line of Jinan-Qingdao Expressway. At the exit of Bucun, go south along the provincial highway S241, which is the direction of Duozhuang Town. Turn left at Nanming Bridge in Nanming Village and leave the provincial highway. , drive about 4 or 500 meters through Nanming Bridge, then turn right on a very narrow road, and enter the mountain road leading to Xiaqiulin and Shangqiulin. The road here is very narrow, and most places only allow one vehicle to pass, so be careful Driving, pay attention to avoid other vehicles in advance, this section of the road is about 5 kilometers, the end point is Shangqiulin Village.

Although Shangqiulin Village is in the deep mountains, there are more than 500 people and 180 households in the whole village. Both Shangqiulin and Xiaqiulin are ancient villages that began in the Jianwen period of the Ming Dynasty. Shangqiulin first moved from Husheluo Village, Laiwu. , so it is called Qiulinyu, and the name of the village takes the name of Shanyu to get Qiulin Village, and over time it becomes Qiulin Village. The difference between Upper Autumn Forest and Lower Autumn Forest is divided into the upper part and the lower part of the mountain valley.

Shangqiulin Village in summer is unique in the shade of trees. Stone-built houses are spread out on the hillside, up and down, left and right. Youzhi, the small road in the village turns around in a zigzag shape, and there is a landscape at every turn. It is said that masters of painting often come here to sketch, especially in autumn, the village is colorful.

The village houses are very distinctive. Whether the courtyard wall or the house wall is made of bluestone, and a small part of the half wall is made of adobe. There are also some red-brick dwellings, some with flat roofs, and some with hard mountain ridges, red and green, and the scenery is very beautiful.

Lao Jin was in Shangqiulin Village for the first time, so he walked along the mountain road that turned around and turned me into a daze. I can’t find my way.

There is a huge cistern in the village. There is a red five-star carved on a stone in the pond, which shows how important water is to the mountain village. There is a clear and green natural reservoir in the river valley, but because there is at least a 100-meter drop from the height, it is too difficult to lift the water manually, not to mention that the road in the village cannot be opened to traffic at all, and it can only rely on manpower.

There used to be primitive beliefs in the village. Some villagers built small temples on the walls of their houses. There was even a temple in the valley. A special stone temple, it is said that it was called Qishengtang at the earliest time. Because I was dizzy in the village when I came, I did not find this stone temple in the end.

The most beautiful season in Shangqiulin Village In summer and autumn, there are lush trees and gurgling streams in summer, while autumn is colorful and picturesque, and the Wuzhi Mountain behind it becomes the most unique background. Wuzhi Mountain is an upright five boulders on the north side of Cao Cao Yuding, shaped like five One finger, because one piece collapsed, and now there are only four left, so the villagers also call it Silengzi Mountain.

From the highest point of the mountain village, walk It took ten minutes to reach the ridge of the Great Wall Ridge. There are relics of the Qi Great Wall all along the way. There is the best-preserved ancient city wall on the top of Cao Cao Yu. As for the stories about the ancient business road and Beimen Pass, the Qingshi Alley is filled.< /p>

There are too many beautiful villages in Zhangqiu Duozhuang. If it weren’t for the inconvenience of transportation, Shangqiulin Village would be more beautiful than Wucai Mountain Village, and the village’s historical and cultural heritage seems to be more profound!