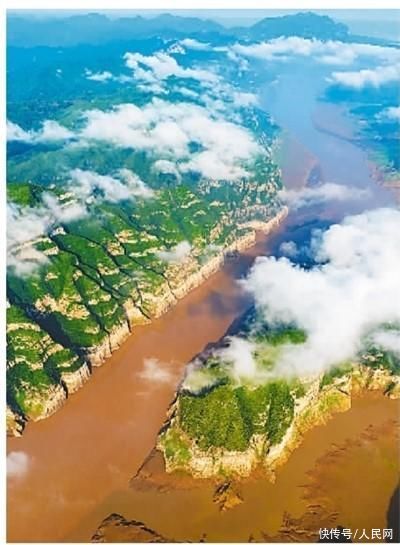 A sea of ​​clouds is seen over the Yellow River in Jiyuan City, Henan Province. Photo by Li Peixian (People’s Photo)

In summer, the Yellow River National Geopark is full of lush greenery, and the clouds are gentle and windy. From time to time, tourists come to take a stroll and punch in. The Yellow River is magnificent and rolling eastward.

Not far away, the machine roared, and the water source of the Yellow River continued to flow to Zhengzhou City, Henan Province through the main water supply channel in the park. The Yellow River water is drawn from the irrigation station, and the water is slowly transported from the Mangshan Main Canal to the High-tech Zone Waterworks by taking advantage of the height difference between the mountains in the park and the urban area of ​​Zhengzhou. In 2021, the Yellow River National Geopark will complete 120 million cubic meters of water throughout the year, with a cumulative water supply of 117 million cubic meters. Except for some areas in Zhengzhou High-tech Zone that use Yellow River water as domestic water, most of it is used as ecological water for urban river courses. Hydrate inside.

This year’s summer grain harvest is bumper, and Tian Wenjun, a villager in Lizhuang Town, Fengqiu County, Henan Province is overjoyed. “More than 60 mu of land have been planted, and the average yield per mu is 1,000 jin, and the highest plot per mu has reached 1,200 jin!” Tian Wenjun said that the summer grain harvest exceeded expectations, “thanks to the water from the Yellow River this year.”

“Introducing the water from the Yellow River, we have truly achieved living near the water, and the days pass by, the more rushing we are.” Seeing the improvement of the ecological landscape along the Jian River at the door of the house, the villagers of Anle Village, Chengguan Town, Xin’an County, Luoyang City often Spring is happy. The 78-kilometer slow-walking trail winds eastward, and is equipped with landscape platforms, roaming trails, green parks and leisure stations along the way. Chang Xiangchun comes here every day for a leisurely stroll with friends.

Xin’an County guards the last canyon outlet of the Yellow River. Constrained by the complex mountainous landforms, small watersheds are prone to frequent mountain torrent disasters, and water resources are scarce all year round. On November 1, 2020, with the opening of the river diversion project, the Yellow River water from the Xiaolangdi Reservoir area rolled into Xin’an County, moisturizing the urban area. In order to solve the problem of insufficient water source of the Jian River, Xin’an County implemented the project of diverting the river to the Jian River from the right bank of the largest tributary of the Xiaolangdi Reservoir Area through a 13.6-kilometer underground tunnel, and the water of the River River is supplied to the Jian River through the artesian flow. By rationally allocating the water resources of the Yellow River, Xin’an County has solved the problem of water difficulty. Today, the annual water diversion project can reach 48.47 million cubic meters, which can meet the domestic water needs of residents in Xin’an County and industrial water along the Jian River, provide sufficient water sources for the irrigation areas on both sides of the Jian River, and restore the irrigation area along the line of 24,000 mu.

In recent years, taking the efficient use of the water resources of the Yellow River as the first move, Henan Province has vigorously promoted the “five-water comprehensive reform” of water resources, water rights, water conservancy, hydraulic engineering and water affairs, and effectively put the “water-based city, Set the land with water, set people with water, and set production with water” has been put into practice.

In addition, Henan also accelerated the construction of the flood control engineering system, completed the “13th Five-Year Plan” flood control project of the Yellow River and the flood control project of the lower reaches of the Qin River, built 501 kilometers of standardized embankments on both sides of the Yellow River, and rebuilt 23 Qinhe culverts and gates; The Smart Yellow River was first tested, and 15 dam-bank danger monitoring, early warning and alarm systems and 4 Tianyan river inspection systems were constructed to realize the full coverage of the cloud video system at the three levels of provinces, cities and counties. Implement water-saving actions, comprehensively improve the level of water-saving, strengthen the daily supervision of ecological flow and the refined management of rivers and canals…