On August 1, Dr. Jing Xuquan from the Sixth Ward of Thoracic Radiotherapy of Shandong Cancer Hospital issued the first prescription of the new ALK tyrosine kinase inhibitor Amberry® (brigatinib) in Shandong Province. With this global innovative lung cancer treatment drug officially entering clinical application, it brings new choices and new hope to patients with ALK fusion-positive advanced non-small cell lung cancer. In the next week, brigatinib tablets are expected to be launched simultaneously in major hospitals in more than 20 provinces and cities across the country. 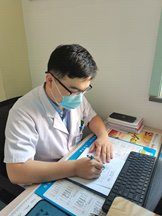 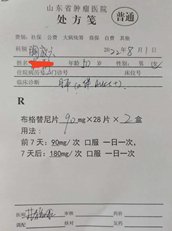 The first prescription of brigatinib tablet in Shandong.

Zhu Hui, director of the sixth ward of thoracic radiotherapy in Shandong Cancer Hospital, said: “In view of the younger and longer survival of the ALK-positive non-small cell lung cancer population, patients are no longer simply satisfied with the efficacy of drugs on the disease itself. , the improvement of quality of life and social function has also attracted more and more attention. We have seen that brigatinib not only brings deep disease remission and longer brain protection, but also significantly improves the quality of life of first- and second-line patients. I believe brigatinib It can bring longer and better survival to more patients with ALK fusion-positive non-small cell lung cancer, and we will also contribute to their chronic disease management together.” 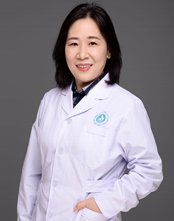 Lung cancer is the largest cancer type in China, and its morbidity and mortality ranks first among all malignant tumors. Among them, ALK-positive non-small cell lung cancer is a relatively rare and dangerous subtype, and the number of new cases in my country is close to 35,000 every year. At present, such patients still have urgent clinical needs to be met: the average age of onset of patients is low, the incidence of brain metastases is high, and there are also gaps in the treatment of ALK fusion types and drug resistance mutations. Data show that about 55% of patients with ALK-positive advanced non-small cell lung cancer will develop brain metastases. Headache, nausea and vomiting, limb movement and sensory disturbance, aphasia, dizziness, memory loss and other symptoms caused by brain metastases seriously affect the daily life of patients and even threaten their lives. Therefore, patients urgently need more innovative and effective therapeutic drugs to innovate traditional treatment methods to prolong survival time and improve quality of life.

As a new ALK tyrosine kinase inhibitor, brigatinib mainly acts on ALK fusion-positive, and its unique dimethyl phosphate (DMPO) microstructure strengthens the interaction with ALK protein. The binding force enhances the activity of the drug, and also creates favorable conditions for the drug to pass through the blood-brain barrier and maintain the blood concentration of the drug in the brain. The latest reported results of the global phase III clinical trial ALTA-1L confirmed that for patients receiving brigatinib, the median PFS assessed by the independent review committee reached 24 months, and the median PFS of the control group was 11.1 months (HR=0.48 , P < 0.0001), the investigators assessed that the median PFS reached 30.8 months vs. 9.2 months in the control group (HR = 0.43, P < 0.0001), which was a 57% reduction in the risk of disease progression or death compared with the control group.

ALTA-1L showed breakthrough efficacy in patients with baseline brain metastases: median PFS was 24 months as assessed by an independent review committee, compared with 5.6 months in the control group (HR=0.25, P< 0.0001), significantly reducing the risk of disease progression or death by 75% compared to the control group. The 4-year OS rate of brigatinib first-line treatment for patients with brain metastases at baseline was 71%, and the risk of death was reduced by 57%, which means that nearly three-quarters of patients with brain metastases can achieve long-term survival of 4 years (more than 4 years), achieving clinical efficacy and Quality of life benefited significantly.