Introduction: “1.2 million yuan for one injection, 2 months of cancer cells are cleared“, in 2021, CAR-T will rely on The sky-high price of 1.2 million and the good therapeutic effect quickly became popular, and became the focus of the industry for a while. As the new favorite of anti-cancer immunotherapy in recent years, the effectiveness of CAR-T has been verified one after another, and more and more products have begun to move from clinical to commercialization. However, for now, the anti-tumor effect of CAR-T therapy still needs to be improved

Since the first CAR-T cell therapy was launched in 2017, the era of cell therapy has officially begun, and good clinical results have been achieved in the treatment of various tumors. B-cell lymphoma is one of them. kind. However, it should be noted that not all patients can achieve good treatment results. More than 60% of patients with relapsed and refractory B-cell lymphoma either do not respond to CAR-T therapy or develop resistance to treatment, leading to disease relapse. Therefore, the anti-tumor effect of CAR-T therapy needs to be improved urgently.

Recently, a research team from the University of Pennsylvania launched an exploration to improve the anti-tumor effect of CAR-T therapy. They found that the anti-apoptotic protein BCL-2 inhibitor can interact with CAR-T T therapy has synergistic effect, and then has a more effective therapeutic effect on B-cell lymphoma (The lethality of CAR-T therapy alone is 47%-63%, while BCL-2 inhibitor and The lethality of CAR-T combination to tumor is 75%-88%). At the same time, they also designed and manufactured CAR-T cells that overexpressed BCL-2 or BCL-2 (F104L) mutation, and found that overexpression of BCL-2 not only improved the resistance of CAR-T cells to the toxicity of BCL-2 inhibitors, but also It can also enhance its anti-tumor ability. The related research results were published in the authoritative journal Cancer Discovery under the title “Modulation of BCL-2 in both T Cells and Tumor Cells to Enhance Chimeric Antigen Receptor T cell Immunotherapy against Cancer”.

In this study, researchers identified BCL-2 inhibitors through targeted screening of 29 pro-apoptotic drugs in a B-cell precursor leukemia cell line (NALM6) It is a toxicity enhancer of CAR-T cell therapy, which can significantly enhance the tumor-killing function of CAR-T cells. Among them, the US FDA-approved drug venetoclax has the strongest effect on enhancing the tumor killing ability of CAR-T cells. The killing ability of CAR-T alone is 47%-63%, while BCL-2 inhibitor and CAR The lethality of -T combined with 75%-88%[1].

To investigate whether dosing enhances CAR-T cell-mediated tumor killing, the researchers used two different B-cell lymphoma cell lines and one leukemia cell line, OCI- Ly18, these cells have different sensitivity to venetoclax. The CAR-T cells were co-cultured with DMSO or venetoclax, and the cytotoxicity was detected at 48 hours. The results showed that venetoclax combined with CAR-T therapy resulted in a substantial increase in tumor killing ability. By comparing the transcriptomes of tumor cells in animals receiving CAR-T and CAR-T/venetoclax combination therapy, research data show that combination therapy promotes tumor cell apoptosis and inhibits Cancer cell cycle to enhance CAR-T-mediated tumor killing ability. In this regard, the researchers indicated that the combined use of venetoclax and CAR-T cells may be a promising strategy to improve the clinical outcomes of CAR-T 19 in the treatment of venetoclax-sensitive lymphomas. 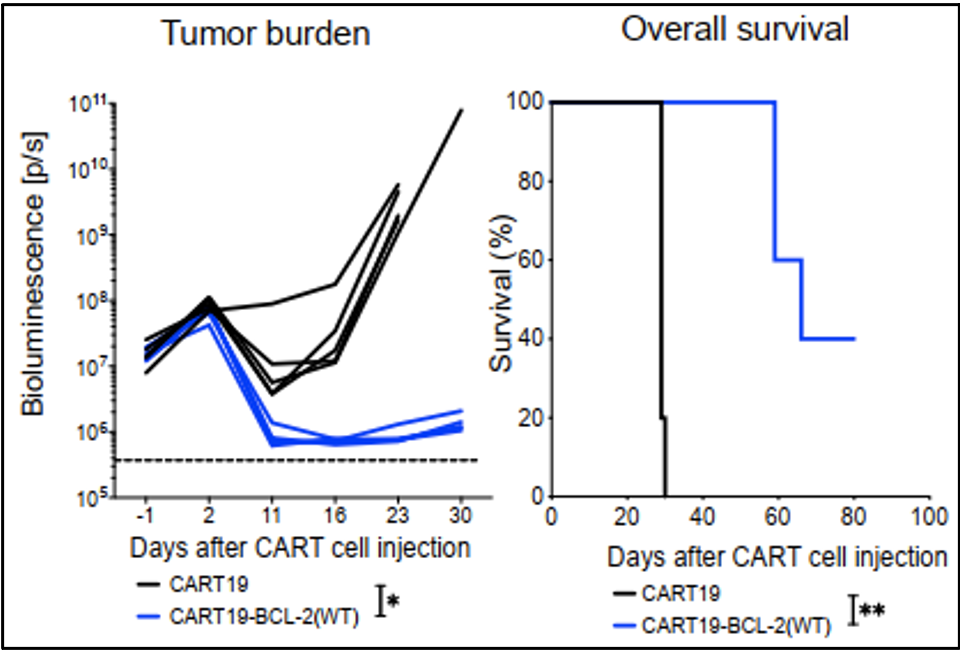 In order to understand the mechanism by which BCL-2 overexpression may enhance the antitumor activity of CAR-T cells, the researchers conducted in vitro and in vivo functional studies of CAR-T cells. The researchers found that BCL-2 overexpression could protect CAR-T cells in the absence of cytokine-generated survival signals, possibly through the enhanced JAK-STAT survival signal pathway. That is, the apoptosis pathway mediated by BCL-2 has a very important regulatory effect on the anti-tumor ability of CAR-T cell therapy.

In addition, the researchers said that although BCL-2 overexpression resulted in a significant increase in the anti-lymphoma activity of CAR-T cells, the key issue with this approach is its long-term safety. To address safety concerns, the researchers designed a BCL-2-overexpressing CAR-T cell with an antibody-based suicide gene control element, and also demonstrated its efficacy.

In summary, the researchers proposed and confirmed a new method to improve the anti-tumor effect of CAR-T cells by regulating the BCL-2 signaling pathway of CAR-T cells and tumor cells. Treatment ideas.