The Shanghai healthcare system appears to have been overwhelmed by the outbreak since early March 2022 .

Chen Shunping, a 71-year-old Shanghai citizen, likes classical music and performances, and is a violinist in the Popular Symphony Orchestra , this time, he was known not because of the music, but because of his death.

The last journey of his life was not “Shunping” – at 8:00 on April 16th, The Weibo titled “Son of Chen Shunping” posted that in the early morning of April 14, because of his father’s severe abdominal pain and vomiting, he sought help from Tongji Hospital Affiliated to Tongji University, (Affiliated to Tongji University)< span>Tenth People’s Hospital, none of them received treatment.

Chen Shunping continued to vomit after returning home, and then jumped off the building the next morning due to unbearable pain died. Previously, he said in a hurriedly written word: “Several hospitals refused to accept me for treatment because of the epidemic, and I was very helpless. After returning home, the condition was revealed. According to my experience, 89% of 10% is pancreatitis. Yesterday I can’t sleep at night, and I think my life is coming to an end, so I’m leaving a will.”

According to According to the blog post, on the day of Chen Shunping’s death, Tongji Hospital said, “Last night there was a positive (positive patient) , but it was still admitted after killing.”

From a legal point of view, Nie Xue, a partner of Hua Wei Law Firm, believes that positive patients in the department are the main reason. By refusing to admit patients, it is essentially a violation of the “Physician Law” and other laws and regulations. “The hospital’s control goal should be to minimize the risk of transmission and maximize the treatment of patients; instead of refusing or delaying diagnosis and treatment in pursuit of zero infection risk.”

What is the truth?

On the 17th, Hua Yan, deputy secretary of the Party Committee of Tongji Hospital Affiliated to Tongji University, told the health community that the hospital’s emergency, emergency The fever clinic has been receiving regular consultations and is open 24 hours a day. Patients with fever can go to the fever clinic for treatment.

Liang Aibin, vice president of Tongji Hospital, who has been leading the rescue team in Fangcang shelter hospital since March 25, said to Health Jie said that at present, the hospital attaches great importance to the incident. “Through normal channels and procedures, we all welcome comrades in the media to connect with us.”

According to the blog post, the second hospital that the 120 ambulance sent Chen Shunping to was the Tenth People’s Hospital of Shanghai. Hospital, “As a result, the tenth hospital did not open.”

According to the “Suspension of Medical Services in Major Medical Institutions in the City” published by “Shanghai Release”, April 13 , On April 14, the emergency department of Shanghai Tenth People’s Hospital was not included in the suspension list.

The health community has learned from insiders that the on-site situation of the Shanghai Tenth Hospital described by the patient’s family is different from the actual situation. does not match.

At 13:00 on April 16th, the hospital’s public account pushed the article “The Tenth Hospital Medical Treatment Continuous Line”, emphasizing ensuring that the green channel for first aid is open 24 hours a day, and no nucleic acid negative report Patient care is not delayed. 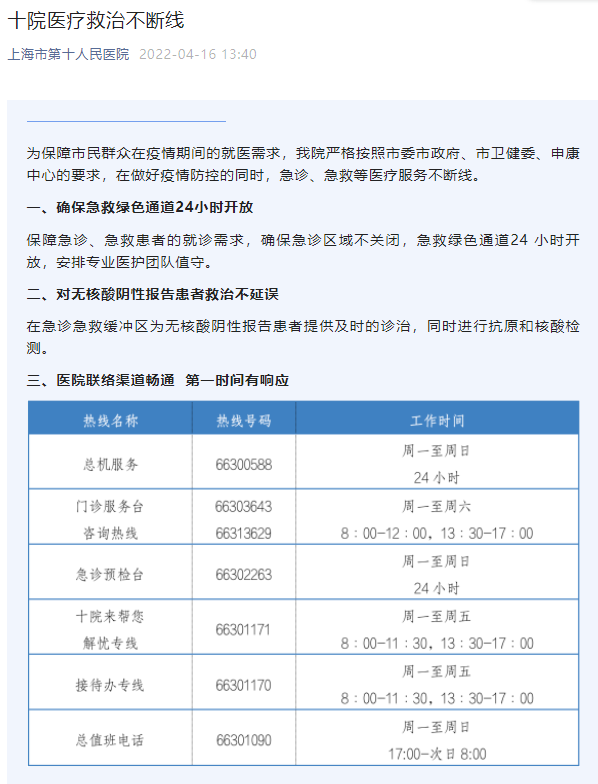 span>The son of Chen Shunping declined the request of the health sector to verify the factual details. The last public online statement he left was: “My aunt and I (stepmother) never thought of blaming anyone, nor did we ask for an explanation. “This should be in line with what he said when he first exposed, “This article does not want to blame or hold anyone accountable.”

For the time being, we will put aside the different expressions of the incident. What is reflected behind this incident is the treatment of emergency patients under the epidemic. issues that deserve attention and discussion.

“I can’t stop (consultation) and it is too late to stop (consultation). Do? The ambulance is coming, we don’t haveThe killing time can only be gradually eliminated after the patients are admitted. “When asked how to deal with positive infected patients in the emergency department, the manager of another public tertiary hospital in Shanghai told the health community that the hospital has clean areas and polluted areas, and all patients are managed in separate areas.

At 16:00 on April 19th, the official website of the Shanghai Municipal Health Commission released “About Shanghai during the epidemic prevention and control period” Notice on the Procedures for Medical Treatment of Citizens”(Shanghai Pneumonia Prevention and Control Office [2022] No. 409), the “Notice” stated that recently, Shanghai citizens have faced many difficulties and difficulties in receiving normal medical services. Therefore, it is emphasized that the city’s second-level and above general hospitals, children’s hospitals, emergency departments, and fever clinics will not stop in principle(except designated hospitals for new coronary pneumonia); For critically ill patients, the green channel for first aid should be unblocked, and patients who need emergency first aid should be treated in time; the responsibility system for the first diagnosis and the emergency and critical care system should be strictly implemented, and treatment should not be shied away or delayed treatment…

< >“The pain of pancreatitis is unbearable”

According to the blog post, Chen Shunping’s symptoms were “discomfort in the abdomen, gradually painful and increasingly severe, accompanied by vomiting(without diarrhea)“.

“The most common is pancreatitis, and other diseases such as intestinal obstruction should be differentially diagnosed.” A tertiary hospital in Shandong Gastroenterologist Li Ji(pseudonym) told the health community that the pain caused by pancreatitis is unbearable, and in addition to abdominal pain, patients with severe pancreatitis have to endure A series of discomforts such as bloating, wheezing, palpitation, etc. “The patients we see usually go to the doctor within 1 to 2 days after the pain, and rarely more than two days.”

Li Ji mentioned that for patients with pancreatitis, rapid fluid replacement therapy should be used to promote the metabolism of inflammatory factors. Pancreatic activity of somatostatin and its analogs(octreotide)inhibit pancreatic exocrine secretion and improve abdominal pain symptoms.

As for the “120(doctor)< span>Suggestion: This disease is not fatal, go home and buy pinaverium bromide tablets (Deshute) to eat” is it useful for treatment, Li Ji’s answer is “no use”.