Halfway through the summer vacation, the romantic “Qixi” begins today. According to the 2022 “Qi Xi” travel data released by Ctrip, female users who love special hotels dominate hotel reservations during this year’s “Qi Xi” festival. A variety of “night games” have become the first choice for young people to celebrate the holidays after get off work.

However, there are also very unfortunate tourist destinations. Sanya, which was originally ranked on the “Tanabata” tourist hot list and is in the peak tourist season, was hit by the epidemic.

Sanya was once one of the earliest cities in the country to open up its epidemic prevention policy to welcome tourists, but the peak summer tourist season has just passed halfway. Suddenly the “pause button” was pressed. 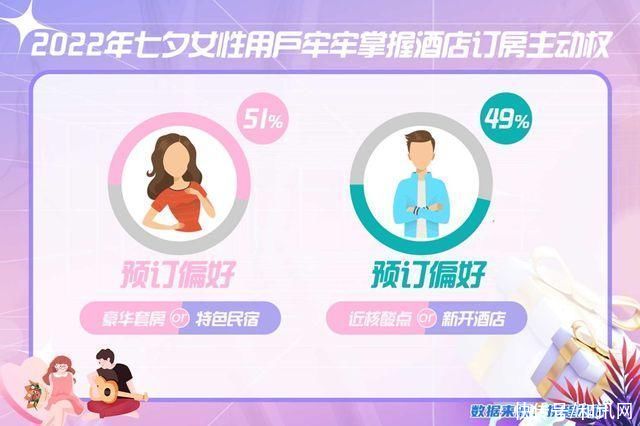 This year’s Qixi Festival, featured hotels are very popular. According to data from the Ctrip platform, as of August 2, the domestic overall hotel bookings and high-star hotel bookings on Qixi Festival have both increased by more than 2 times compared with last year, and the special hotel and hourly room bookings have both increased by more than 1 times. The number of homestay bookings has nearly tripled compared to the same period last year.

From the week before the Chinese Valentine’s Day, female users have firmly grasped the initiative to book a room. According to data from the Ctrip platform, female users accounted for more than 50% of domestic hotel reservations from July 25 to the present. In order to welcome the Qixi Festival, the romantic atmosphere created by the host of the homestay and the warm experience brought by the non-standard accommodation make the homestay the first choice for female users to book rooms. Compared with female users, male users pay more attention to the nucleic acid detection points at close range and the opening time of hotels. Newly opened hotels are often more favored by male users.

It is worth noting that, from the perspective of the hotel’s special room types, compared with last year’s Qixi Festival, the number of rooms equipped with comfortable mattresses is higher. The bookings of deep sleeping rooms increased by 507% year-on-year, taking the lead among the theme room products on Ctrip. In addition, taking the baby to celebrate the Qixi Festival, “opening black” in the e-sports hotel or watching a romantic movie in the video room have also become popular choices for families and couples to celebrate the Qixi Festival. According to data from the Ctrip platform, the number of bookings for parent-child rooms and audio-visual rooms on the Ctrip platform has increased by nearly three times compared with last year, and the number of e-sports room reservations has increased by 161% compared with last year.

Zhang Zhining, deputy director of the Strategic Research Center of Ctrip Research Institute, believes that the appearance of the Qixi Festival has added a romantic atmosphere to the rapidly recovering domestic tourism market, giving tourists who love to travel one more reason to travel. The surge in popularity of specialty hotels and the popularity of Hainan and Yunnan reflect the accelerated upgrade of travel consumption towards themed, personalized and experiential; Play an important role in stimulating the recovery of the domestic tourism market.

The article is integrated from: First Finance and Economics, Beijing News, etc.