This article is reprinted from: People’s Daily Online 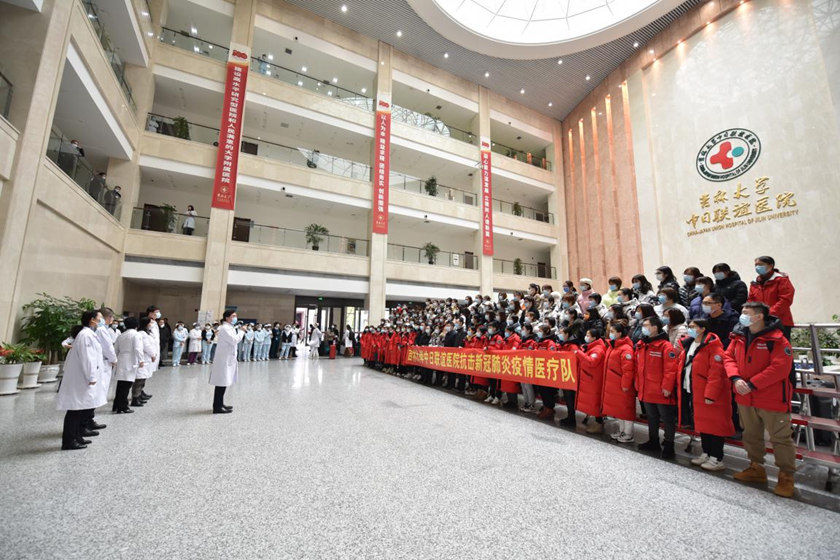 The hospital medical team set off.

In this big exam full of risks and challenges, the Third Hospital of Jilin University has become the only hospital in Jilin Province that simultaneously undertakes the “red code, yellow code, green code” all-round and system-wide medical treatment functions.

Adhering to the “red code” duty and protecting lives

In this round of epidemic, the hospital has dispatched several medical teams to take over the designated hospitals in Yanji and Meihekou. The hospital, Tongyuan Fangcai Hospital, and No. 3 cabin of the Warrior Road Fangcai Hospital have treated more than 6,700 patients and cured more than 5,300 patients. Among the patients admitted, the oldest is 87 years old and the youngest is only 20 days old.

21 hours to complete the preparations for the Tongyuan Fangcang shelter hospital to enter and receive patients. At present, Tongyuan Fangcai Hospital, where the medical team of the Third Hospital of Jilin University is located, is the Fangcang cabin hospital with the largest number of patients and the largest volume in Changchun, with 3,200 open beds. The patients are mainly mild and asymptomatic. “Through our unremitting efforts, the number of discharged patients has increased, and the number of admitted patients has continued to decrease. We are confident that we will win the battle against the epidemic.” Said team member Jiang Yizhong.

In cabin No. 3 of the Warrior Road Fangcai Hospital, members of the medical team transformed the old housing into a “fortress” for defending the health of patients and fighting the epidemic. The team members insisted on daily dressing changes for patients with concurrent infections, and hand-assisted defecation for elderly patients who were unable to defecate… All team members devoted themselves to donating food and living materials such as fruit, milk, and bread to patients.

Meihekou designated hospital opened 500 beds. In addition to the normal transfer of patients, it mainly undertakes ordinary, severe and patients with serious underlying diseases in Meihe Fangcai Hospital. The medical team started the designated hospitals in an orderly manner at the fastest speed and received 279 first batch of new crown patients in Jilin City within 24 hours.

Take up the responsibility of “Yellow Code” and face difficulties

On March 31, the North Lake District of the hospital was set as a “Yellow Code” hospital. From “setting” to “admission”, it took less than 18 hours, and the patients were fully received within 24 hours, running out of the “three hospital speed”. Establish 2 buffer wards, 1 suspected new coronary pneumonia isolation operating room, open 94 beds, and set up 5 treatment areas. Bringing together the elite backbones of 15 departments including neurosurgery, emergency medicine and surgery, and respiratory department, more than 300 medical workers all implement closed-loop management to ensure the closed control area, control area, centralized isolation of patients and personnel with health code “yellow code” To meet the needs of medical treatment, we will fully provide special diagnosis and treatment services such as hemodialysis, tumor chemotherapy and other acute and critical illnesses. In the 18 days since the opening of the clinic, a total of 2,050 people were admitted to the emergency department, and 183 people were hospitalized.

The medical staff of North Lake Hospital of the Third Hospital of Jilin University are performing emergency surgery for emergency patients in the isolation control area.

The 45 members of the medical teams in Yanji and Jiutai returned to Changchun as soon as possible after the end of the support mission, and immediately entered the “yellow code” hospital battle. The members of the medical team in Yanji only rested for 10 minutes. Hours. “The 27-day treatment of patients with severe new coronary pneumonia was intensive, but the team members did not say that they were bitter or tired. After returning to the long-term, we immediately moved to the ‘Yellow Code’ Hospital of Beihu Campus. The persistence of the soldiers in white is the recovery of the patients. hope.” said Zhao Jianjun, leader of the Yanji medical team.

Following the Beihu Campus, according to the needs of epidemic prevention and control, the Nanhu Campus was further transformed into a disease treatment hospital during the post-COVID recovery observation period, which officially opened on April 12.

“Regardless of whether there is nucleic acid or not, as long as it is a critically ill patient, we will unconditionally admit it.” Cui Shusen, secretary of the party committee, spoke loudly.

A 4-year-old child with brain tumor in Tumen City had a 6-hour operation to save his life; a 6-month-old baby was suffocated for 15 minutes by choking milk, and was rescued from the “death” by a multidisciplinary effort; a 90-year-old aunt He was admitted to the hospital due to a fracture and had symptoms of pneumonia in bed for 5 days before. The medical staff tried their best to treat the old man and brought the old man back from the death line…

Faced with the severe epidemic situation, the whole hospital concentrated its best efforts and maximum To limit the treatment of critically ill patients, the national emergency medical rescue base has been fully activated, and the “green channel of life” has been unblocked. The critically ill maternal treatment center, neonatal treatment center, and hemodialysis center of the third hospital were ordered in danger, building a lifeline for special medical groups under the epidemic.

The fever clinic and the children’s fever clinic are on standby 24 hours a day, creating a “15+1” model of fever clinics. Up to now, a total of 2,350 people have been treated, and 41 positive patients have been screened. Optimize the diagnosis and treatment process of dialysis patients, adopt time-based, divided-by-segment and batch-based dialysis, pre-test nucleic acid antigens, and start the “1+1” mode on the same day and the next day to ensure the life safety of dialysis patients.

The opening of outpatient and emergency clinics has never stopped, the medical order has been restored in an orderly manner, and the online re-examination of Internet hospitals has been steadily advanced. The epidemic has never stopped the solid steps to protect the lives and health of the people. Since March 1, there have been more than 100,000 outpatient and emergency patients and more than 5,600 inpatients. (Wang Shuyang and Li Yuhang)