On September 1, local time, one more death from “pneumonia of unknown cause” in Argentina.

As of that time, a total of 9 people have been reported to be infected in this “pneumonia of unknown cause” incident. Three of them died, including a doctor and a nurse.

Infections were reported by local health authorities at a private medical facility in Tucuman province in the northwest of the country. Four infected people are in serious condition and are still being treated in hospital. The other two are in stable condition and are recovering at home.

Information shows that the infected people all developed severe respiratory symptoms, bilateral pneumonia, and vomiting, high fever, diarrhea, body aches, etc. The lung imaging is similar to that of the new coronavirus infection. However, sampling and testing have ruled out 30 pathogens such as the new coronavirus and influenza A/B. Picture description: After the unexplained pneumonia incident, there were media reports at the door of the medical institution involved. /LA NACION

According to the information of the Tucuman Provincial Health Bureau, the latest deceased is likely to be “patient zero”, who was 70 years old and was previously admitted to the medical institution involved due to illness.

From August 18 to now, after his admission to the hospital, a total of 8 doctors and nurses from the intensive care unit and other departments of the hospital have successively developed “pneumonia of unknown cause”.

“It is very likely that rodents such as mice carry viruses (such as hantavirus), or Legionella bacteria colonize the air conditioning system.” Teaching at the University of La Rioja, Spain, and in Gallery Claudio Strasorier, a part-time infectious disease physician with the Manitoba Health Authority, said.

Hantavirus infection can cause pneumonia syndrome. People may get sick by inhaling air contaminated with fresh rodent feces, urine, etc. It usually occurs within about 2 weeks after exposure to the virus, with an incubation period of up to 6 weeks.

Legionella is a pathogenic bacteria mainly parasitic in the cooling water and piping systems of air conditioners. It is transmitted through the air and enters the human body through the respiratory tract. Legionella pneumonia can cause respiratory failure, kidney failure, etc., and even fatal.

However, according to the local Ministry of Health, pre-examination and analysis have ruled out infections such as Hantavirus or Legionella.

In addition to the unknown pathogen, the transmission route is also unknown. Alejandro Lembo, the head of the medical institution involved, said it was probably not a “human-to-human transmission”. Because among the close contacts of the 9 infected people, there are no new cases.

Argentina’s National Ministry of Health said in a statement that the National Agency for Health Laboratories and Research Institutes (ANLIS) took over to investigate the incident and conducted an autopsy on a deceased doctor. Currently waiting for pathogen metagenomic sequencing results, etc. 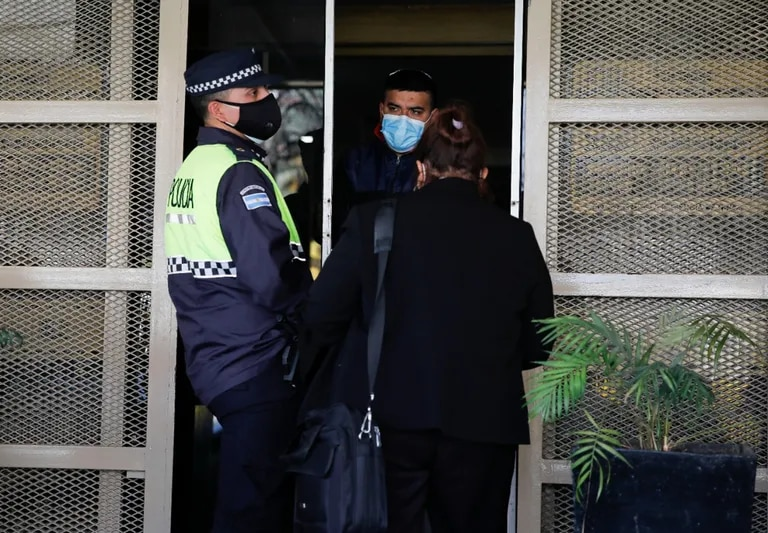 Picture description: The medical institution involved has been isolated and managed, and the acceptance of new patients has been suspended. /LA NACION

Pneumonia is difficult to “verify”

An infection professional told the “Medical Community” that pneumonia of unknown cause is a medical term with a specific meaning.

The Imaging Center of Beijing You’an Hospital Affiliated to Capital Medical University issued a document in January 2020, stating that its origin was related to the SARS epidemic in 2003, specifically referring to “unknown pathogens, or clinical and laboratory methods that cannot be used for Pneumonia due to respiratory tract infection for which the causative agent has been diagnosed or clearly identified”.

According to the “National Monitoring, Investigation and Management Plan for Pneumonia of Unexplained Causes”, cases of pneumonia of unknown cause refer to cases of pneumonia with the following 4 conditions that cannot be clearly diagnosed at the same time: First, fever (≥ 38℃); second, imaging features of pneumonia or acute respiratory distress syndrome (ARDS); third, the total number of white blood cells decreased or normal in the early onset, or the lymphocyte differential count decreased; fourth, the standard antibiotic treatment 3- 5 days, the condition did not improve significantly.

The aforementioned infection professional said that it is sometimes difficult to identify the specific pathogen of pneumonia. Even if it is clinically judged to be bacterial pneumonia, antibacterial therapy is effective, but it is not always clear what bacterial infection is causing it. In addition, a pathogen detected in sputum may not necessarily be the pathogen causing pneumonia.

“Every step of finding pathogens is difficult.” Li Huajun, an attending physician in the Department of Infectious Diseases, Xinhua Hospital Affiliated to Shanghai Jiaotong University School of Medicine, told the “medical community”.

He cites a blood test as an example: “An antibody in the blood can only prove that you have been infected with a certain pathogen, but it may have happened several months or even a year ago.”

If sputum culture is performed, the patient may spit out saliva instead of sputum and other secretions, which is an invalid sample.

After the samples are taken, the success of the culture depends on the one hand whether the live pathogens are taken, and on the other hand the quantity. Dead bacteria, small amount, may fail.

“The most important thing is that there are a large number of pathogens in the respiratory tract of normal people, that is, colonized bacteria. The results obtained from this culture may not be the cause of pneumonia.” Li Huajun said.

According to the literature, how to distinguish pathogenic bacteria from colonizing bacteria has always been a tangled issue for clinicians, hospital infection personnel and laboratories. A more objective approach is “diagnostic treatment” or “empirical medication”. If the clinical symptoms are relieved after the medication, and the number of target bacteria at the infection site is reduced, it is a pathogenic bacteria. Only a decrease in the number, but no change in clinical symptoms, is more likely to be colonizing bacteria.

Li Huajun said that, based on this, the pathogen is generally judged clinically based on age, symptoms, imaging characteristics, etc., and then empirical anti-infection is adopted.

“In the UK, we usually do not routinely test for pathogens in patients with pneumonia. Until recently, many laboratories have not been doing this because of the new crown epidemic.” Jonathan Bowe, Professor of Molecular Virology, University of Nottingham, UK Jonathan Ball said.

Even when a pathogen is detected, it can be difficult to isolate the source of infection. In 2021, the United States reported 4 cases of Burkholderia melioidosis infection, including 2 deaths. This is a rare tropical infectious disease. From reporting the first case of infection, to discovering the connection between the cases, and finally confirming that the pathogen was hiding in a fragrance, the US CDC took more than half a year.

Jonathan Ball said that the new crown epidemic has disrupted the spread of other pathogens, and experts should be vigilant for more unusual infections and symptoms. “It could be an emerging infectious disease, or it could be a rare set of events in a known disease. There may be more of these events before we return to a cycle of cyclical, seasonal transmission of respiratory viruses.”< /p>

According to the British “Daily Telegraph”, the “epidemic intelligence service team” of the European Center for Disease Control is tracking the above-mentioned infections. The World Health Organization has also received relevant information.