American TV has a reality show called “The Biggest Loser”, which has aired nearly 20 seasons since 2004, and at its peak, 10 million Americans watched the show .

The majority of contestants have a body mass index (BMI) of over 40, which means they are severely obese. They were to lose as much weight as possible by dieting and exercising for 30 weeks. The champion who loses the largest percentage of body weight will receive a $250,000 prize.

Be thin and make money, everyone does their best. Champions generally lose at least 45% of their body weight, and the most exaggerated 15-season champion Rachel Frederickson even lost 59.6% of her body weight, directly changing her BMI from “fat” to “too light”. 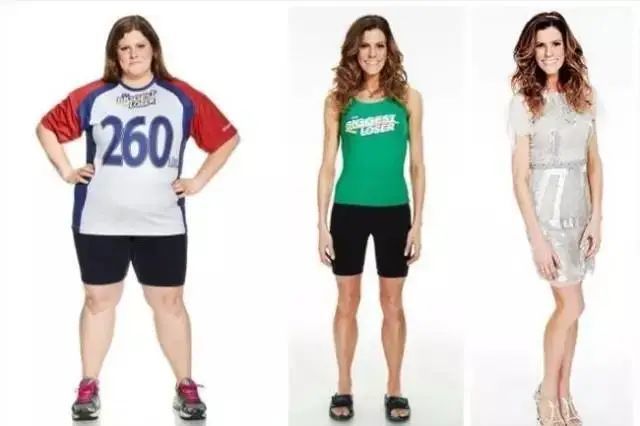 While the contestants were creating “miracles”, doubts about the show were also rising. Many critics say that such rapid weight loss is likely to be harmful to health, that the weight loss effect will not last, and may even be life-threatening.

The research community took notice of the show, and a search on pubmed with the keyword “the biggest loser” turned up 22 papers. The latest of these is a paper published in the journal Obesity by Kevin Hall’s team at the National Institute of Diabetes and Digestive and Kidney Diseases. They obtained permission from the 14 players in the 2009 season 8, followed them for 6 years, and came to the sad conclusion-

Most of the meat that these players have lost through hard work has grown back.

After 6 years, only 1 out of 14 people managed to keep their weight loss results.

The worst part is that the lost weight has rebounded, but the resting metabolic rate that has fallen has not rebounded – these people basically have to eat less than one meal a day. Food, to stop yourself from continuing to gain weight.

What is the “resting metabolic rate” that falls?

What many people don’t know is that the vast majority of calories your body burns every day is not due to conscious exercise, but unconscious consumption. “Keep breathing and don’t die” is a very energy-intensive thing. Even if you’re too lazy to think, stay at home, and eat takeout three times a day in bed – your body will use up a lot of energy every day. You need to maintain breathing, heartbeat, body temperature, endocrine, decomposition and synthesis, excretion and circulation, and ensure normal functioning of neurons and skeletal muscles… The resting metabolism of an average adult is about 1200-1500 kcal per day, which will take up all energy consumption 60-80%. All your other activities, running, jumping, talking, laughing, and energy expended digesting food—add up to only 20-40% of your total energy consumption.

The body’s ability to adjust and adapt is very powerful. We also have “metabolic adaptation” when it comes to metabolism. You must know that there is so much food that you can eat fat, which only happened after the modern agricultural revolution. Most of the previous human beings lived a life of relying on the sky to eat and starve. If the resting metabolic rate is not able to bend and stretch, how can human beings endure many times of starvation?

So, of course, when you’re starving, your resting metabolic rate will drop, as scientists expected. To their surprise, the metabolic rate didn’t come back when the weight came back! After the metabolic rate drop is an L-shaped curve – they would have expected to see a U-shaped recovery or something. The players’ bodies seem to have been “frightened” ever since they experienced the “famine disaster” of rapid weight loss, refusing to switch from “saving mode” back to “normal mode”.

The cause of obesity is low metabolism

According to estimates, the resting metabolic rate of the contestants is 704 kcal/day lower than before, that is to say, they have to eat 12 taels of rice less than before in order to “maintain the current situation” weight”.

Even after accounting for changes in their bodies and age—after all, six years older, metabolic rates normally drop—the contestants burned 500,000 less than their peers Card, that is to say, eat 8.6 taels of rice less than others. As long as you eat the same as everyone else, you will gain weight quickly.

Despite the players’ will to lose weight, their bodies are doing everything they can to bring the weight back to its previous “set point.” 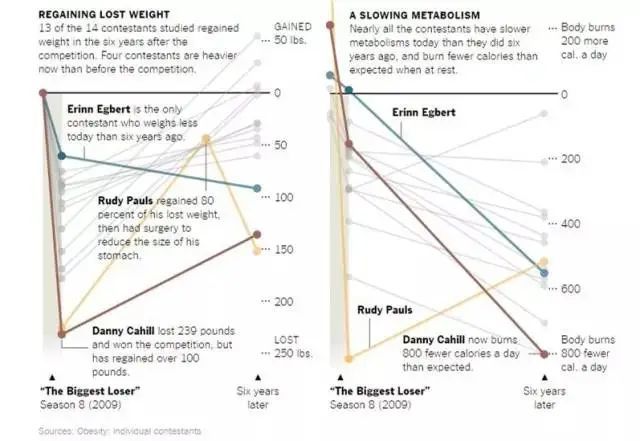 The red line in the line chartIt was Danny Cahill, the season 8 winner, who went from 195kg to 87kg in the race. Today, he is 133 kg. Studies have shown that he is now consuming 800 kcal less per day than people of his weight who never lost weight. 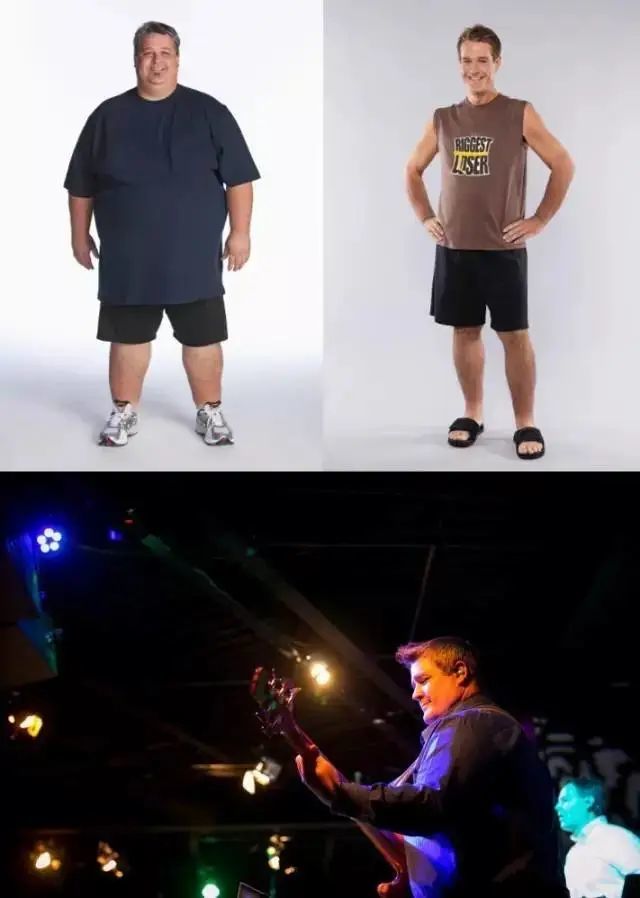 The yellow line is a “successful example” of weight maintenance, but it’s a victory for bariatric surgery. Rudy Pauls, who rebounded 70kg at one point after the game – then he had stomach surgery. Now, he weighs 126 kg and consumes 516 kcal less every day. 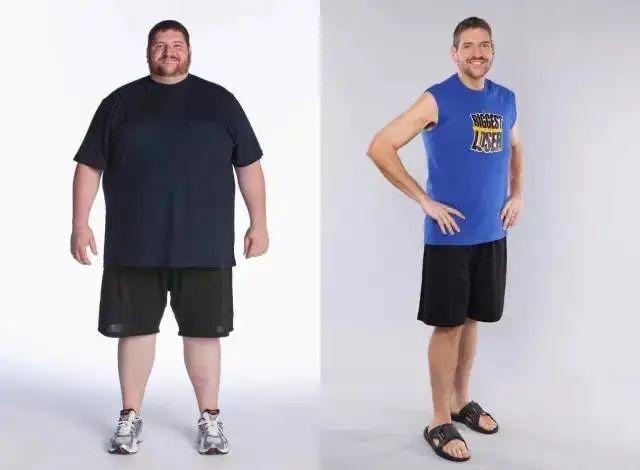 Rudy Pauls weighed 200kg (left) before the race and 106kg at the end of the race (right). ｜nytimes.com

Even the only people who actually maintained their weight loss gains also experienced a dramatic drop in resting metabolic rate. Erinn Egbert, the blue line in the line graph, has dropped from 119kg to 80kg and remains around 70kg today. However, she consumed 552 kcal less per day.

These contestants who participated in the “Super Weight Loss King” were obese before the competition, but their resting metabolic rates were still quite satisfactory, which was in line with their age, height, weight and muscles.

However, this game of exhaustion and starvation has made them “reborn”, in addition to the size of fat cells in the body, it also includes the resting metabolic rate of the entire body , and endocrine hormone levels.

The two hormone levels are disordered due to weight gain

After the competition, the contestants found that they were in a vicious cycle of “long-term hunger-extreme craving-overeating”.

Data suggests this may stem from a slump in leptin levels in their bodies.

After the game, they were less extreme on their diets and their leptin levels slowly recovered, but only to 67% of their pre-game levels.

This means they are less full,they are constantly hungry. They also crave more than the average person for high-fat, high-sugar junk food — foods that are bad for your health but activate your brain’s reward center.

What should I do if I feel like I will never lose weight again?

However, those who “successfully” lose weight look skinny, dress skinny, walk skinny—but not really skinny. Their metabolism, not the metabolism of skinny people who have never lost weight. Compared to thin people of the same weight, these “pre-fat people” consume a lot less energy each day. Their hormones, not those of the skinny guys who have never lost weight, these “pre-fat guys” have to endure more hunger pangs.

You are fat for one day, fat for life, lose weight quickly, and you are still “thin and fat”.

And this study also clarifies many misunderstandings about obesity.

“Fat people get fat because they are too lazy and greedy.”

Look at the results of the “Super Weight Loss King” contestants – they lost an average of 58kg in 30 weeks, and their willpower is far superior to ordinary people!

However, obesity is a chronic disease that is influenced by biological factors. And disease is not a problem that can be solved by willpower alone. When the metabolism of the whole body tends to slow down, there is little way to resist the body’s forces to “regain the weight”.

Donna Ryan, a researcher at the Pennington Biomedical Research Center in Baton Rouge, said: “This study once again illustrates how our bodies and physiology determine our weight, Willpower really doesn’t do much.”

”It doesn’t matter if you are fat when you are young, you will naturally lose weight when you grow up, and you can’t lose weight any more. ”

“It’s ironic that you’re fat to help you lose weight.”

But sarcasm is only counterproductive.

After the results of this experiment came out, many players who had regained weight finally got rid of the shame that weighed on their hearts.

—It wasn’t “me” that had a problem, but my metabolism and hormones.

Many studies have shown thatthe more overweight people feel stigmatized and discriminated against, the more likely they are to gain weight. The reason may be that these taunts increase psychological stress, which induces physiological changes (such as chronic inflammation) that further contribute to weight gain. A 2014 British study showed that for overweight people with a BMI between 25 and 30, the higher the psychological stress, the higher the level of C-reactive protein (CRP) – a sign of inflammation in the body.

Also, a traditional way for mammals to relieve stress is to eat, especially high-calorie sweets that can quickly raise blood sugar. In the contemporary age where thinness is beautiful, every overweight person has already criticized, satirized and scolded himself a million times in his heart, and he really doesn’t need others to “help” to increase the pressure.

There is neither good intentions nor good deeds. Save it.

“Losing weight is the number one priority in your life.”

No, the number one priority should be improving your body’s health.

Obesity has many negative health effects, so doctors recommend that people who are overweight or obese lose weight. However, we don’t need to lose 30% or 40% of the body weight like those athletes. If we start exercising moderately and regularly, we won’t lose much weight at the same or just fine-tuned calorie intake—sometimes we even gain a little bit of weight due to muscle growth.

However, when you eat a healthy diet and exercise regularly, even small changes in your weight can make a huge difference in your health. As long as we improve our physical health, we are successful.

Short-term fluctuations in the number on the scale are not significant by comparison.

Maybe you still want to ask, the most “successful” dieters in the world are so “failed”, so is there any hope for me?

All that needs to be given up is the illusory hope of “quick weight loss.”

What you can do now is to reduce your weight slowly and steadily. If you have the conditions, you can seek the advice of a professional fitness coach, nutritionist, and endocrinologist. In the meantime, wait for newer and better research to allow science to help us fight the obesity epidemic.

“It’s just that we need to explore more avenues.”

It’s so miserable that this AI can’t bear to talk anymore, just copy it…