All are incredible technical achievements

This is a subversive discovery: the presence of cell-free fetal DNA in the peripheral blood of pregnant mothers. This shatters the preconceived notion that DNA exists only inside cells.

Over the past 20 years, due to Lu Yuming’s above-mentioned findings, prenatal diagnosis technology has undergone tremendous changes. The “Non-invasive Prenatal Diagnosis” (NIPT) technology developed accordingly has been widely used in more than 60 countries and regions around the world. In 2018, more than 10 million related tests were performed worldwide.

“However, when scientist Lu Yuming first made this discovery in 1997, people just shrugged.” The New York Times reported. Lu Yuming was also surprised. “Initially business experts thought it could only be used to determine the sex of a baby. They didn’t realise how far this could go,” he told The Guardian.

On September 28, local time, Lu Yuming, currently Director of the Li Ka Shing Institute of Health Sciences and Head of the Department of Chemical Pathology at the Chinese University of Hong Kong, was awarded the “2022 Lasker Award for his great contribution” Clinical Medicine Award”. This is one of the prestigious awards in the medical field and is known as the “Nobel Weathervane”.

On the same day, the organizers also presented two other awards for this year.

Lauren Gardner of Johns Hopkins University won the 2022 Lasker Award for Public Service for pioneering the development of a “map of the COVID-19 pandemic.”

Richard O. Hynes, MIT, Erkki Ruoslahti, Burnham Preby Institute for Medical Discovery, and Timothy A. Boston Children’s/Harvard Medical School .Springer, sharing the 2022 Lasker Prize for Basic Medicine. The organizers said that the three people’s research and discovery of integrins have promoted the research and development of new drugs for autoimmune diseases such as Crohn’s disease and ulcerative colitis.

Inspiration from a bowl of instant noodles

Most scientific achievements are born out of repeated verifications and failures over a long period of time, and it is inevitable for Professor Lu Yuming – he has walked into a “dead end” in scientific research for 8 years.

As early as when he was studying at Oxford University, Professor Lu Yuming was full of doubts, “Why do doctors recommend pregnant women to undergo a prenatal diagnosis operation that may lead to miscarriage? Why can’t they just use the mother’s body fluids, For example, blood, to test the fetal DNA is normal? In 1969, someone detected fetal cells in the blood of pregnant women, why not use it for prenatal diagnosis?”

Based on previous discoveries and his own thinking, Professor Lu Yuming combined the latest polymerase chain reaction (PCR) technology at that time to conduct research on maternal blood cells and capture fetal DNA.

Image courtesy of The Chinese University of Hong Kong

In the summer of 1996, Professor Lu Yuming was faced with a choice. If he could not make a result, he would give up and change his direction. In September of that year, the turnaround came. He read two papers on the detection of tumor DNA in the plasma of cancer patients.

“There are similarities between fetuses and tumors, and both depend on the ‘mother’ to provide nutrition. Since the DNA released by the tumor into the plasma can be measured, why can’t a fetus of five or six pounds? “

When you have an idea, you need to find a verification method. One day, when Lu Yuming was cooking instant noodles, he saw the noodle cakes tumbling in the boiling water, and he was instantly inspired: Can we boil blood and extract plasma?

After cooking, he found very high concentrations of fetal DNA in the mother’s plasma, 100,000 times the concentration in blood cells.

Professor Lu Yuming also used PCR technology to carry out a series of studies on fetal cell-free DNA in maternal plasma, and solved some simple clinical problems, such as detecting fetal blood type and gender.

Based on this discovery, a small amount of venous blood from pregnant women can be used to detect fetal genetic information and troubleshoot genetic defects such as Down syndrome. Since there is no need for amniocentesis, fetal miscarriage is almost zero, so it is called “non-invasive”. 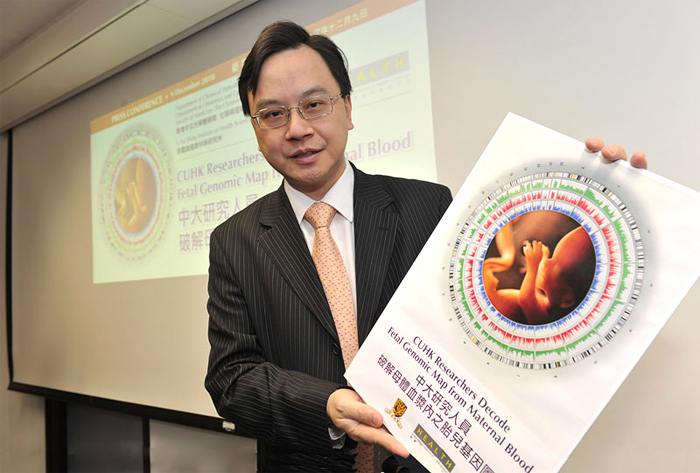 Image courtesy of The Chinese University of Hong Kong

Professor Lu Yuming and his team have spent 10 years trying to turn ideas into reality.

In 2008, he and Stephen R. Quake et al. of Stanford University demonstrated that DNA molecules can be rapidly counted using a massively parallel sequencing (MPS) strategy. Since then, the team has further verified the performance and feasibility of MPS used in Tang sieves, and finally promoted the approval of related products in 2011. Today, more and more hospitals are qualified to carry out non-invasive Tang screening, and the cost is significantly lower than before.

“I am delighted that since its introduction, non-invasive prenatal testing has become a standard of care. It has also sparked global interest in plasma DNA diagnostic applications, particularly in cancer liquid biopsies and Organ transplant monitoring. I look forward to seeing these and other untapped applications that improve global healthcare,” said Professor Lu Yuming in the Lasker Prize announcement.

It is worth mentioning that Tu Youyou won the Lasker Prize in 2011, and she won the Nobel Prize a few years later. Professor Lu Yuming is also regarded as a popular candidate for “taking the promise”.

He has won several awards to date, including the 2021 Breakthrough Prize in Science. In the same year, he also received the “Royal Medal” for biology issued by the Royal Society, becoming the first Chinese winner of the award in the past 200 years since its establishment.

In addition, he has been selected as one of the “Top 20 Translational Research Scientists in the World” by the authoritative scientific journal Nature Biotechnology for five consecutive years. In 2011 and 2013, he was elected to the Royal Society of the United Kingdom and the National Academy of Sciences of the United States, respectively, and was listed as an academician with Darwin and Newton. Public Service Award goes to Lauren Gardner for her leadership in creating the COVID-19 Pandemic Map.

“This sets a new standard for real-time dissemination of authoritative public health data. Provides accessible and reliable information on the spread of emerging infectious diseases, filling a gap in the international public health system , and established a model that can be emulated.” The Lasker Award citation commented.

Lauren Gardner sits in a coffee shop with two doctoral students from China on January 21, 2020. The conversation quickly turned to the then-new coronavirus.

Lauren Gardner wants to build an “online map” to track the coronavirus and study how transportation systems contribute to the spread of the virus. “I want to record the whole process of a disease from ‘birth’ to being overcome by human beings through data collection.”

Several people hit it off. In just 8 hours, the first version of the “epidemic map” was completed and put into operation.

This site is far more popular than expected. The range of red dots representing the number of cases has gradually expanded, and the number of deaths in various countries has risen brutally. The “epidemic map” has become an indispensable source of information for policymakers, scientists, the media and the public. In just 3 months, its cumulative number of visits has reached 16 billion, with an average daily visit of 1 billion.

Time Magazine’s “Best Inventions” of the Year 2020 featured the map and has been named a “must-see data source for 2020.” This annual list honors 100 groundbreaking inventions. Time says it “makes the world a better, smarter, and even more interesting place.”

In the 1970s, cancer researchers discovered that tumor cells are distinct from normal cells. The former do not stick to the cell culture dish like normal cells do, but rather “spread” abnormally.

In order to understand the behavior of tumor cells, scientists Richard O. Hynes and Erkki Ruoslahti conducted their own research. They identified a cell-surface-associated protein that helps attach cells to the surrounding extracellular matrix (ECM). The protein is abundant in normal cells but barely visible in tumor cells. They also captured a receptor that binds to the protein.

Timothy A. Springer’s research, at first glance, seems unrelated to the first two. He discovered transmembrane proteins that mediate the interaction of cells with their targets.

But when these clues came together, the scientific community realized that there is a family of molecules whose members play central roles in a range of processes, from embryonic to fully formed organisms. This family, now known as “integrins”, is a key mediator of cell-matrix and cell-cell adhesion. The aforementioned three people shared the “2022 Lasker Prize for Basic Medicine” for their discovery of integrins.