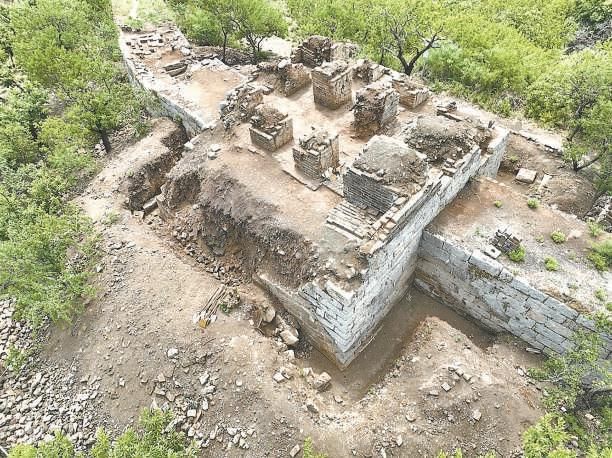 The enemy towers refer to the towers on the wall of the Great Wall used to defend against the enemy. The buildings of Yanqing No. 3 and No. 4 are basically the same, and they are hollow towers built to ride the wall. Archaeologists have found bricks with stamps of “Youcheying” on the walls of these two enemy platforms and the nearby Great Wall. According to historical records, the “Cheying” in Changzhen was established in the second year of Wanli, and the right Cheying was under the jurisdiction of the Changping Guard General. At the same time, on the walls of the Great Wall between the enemy platforms from No. 11 to No. 13 in Yanqing, you can also see the characters “Right”, “An”, “An (anti-book)” and “Zhu” imprinted with Yangwen bricks. These bricks were burned in the same year. The number of the troops making the city bricks, in which “right” is the abbreviation of “right part”, “zhu” is presumed to be the abbreviation of Zhucheng guarding Qianhuo, and “an” needs further study.

According to reports, a stone monument unearthed in this excavation of the construction boundary of “Youcheying Autumn Defense Work End Stop” also revealed that Youcheying not only participated in the firing of city bricks, but also participated in the wall of the Great Wall construction work. The bricks and stones are the evidence, and it is pointed out that the construction time of the hollow enemy stations of Yanqing No. 3 and No. 4 is the early year of Wanli, and it has been about 450 years.

At the same time, during the excavation, archaeologists found that the foundation of the Great Wall wall was superimposed on the hollow base of the enemy platform. It is inferred that the wall was built after the enemy platform was built. The age of the wall construction can also be found on the inscriptions. In 1953, the Beijing 503 Geological Team discovered a monument named “Apocalypse Three-Year-Separate Construction of the Great Wall” during exploration in Houwa, Xiangtun Village. In 2014, when the Longquanyu Great Wall was protected and repaired, a monument was unearthed during the protection and repair of the Longquanyu Great Wall. Both steles mentioned the name “Youcheying”, which is consistent with the inscription bricks on the Great Wall and the stone steles of the construction boundary. It can be seen that this section of the Great Wall was built in the early years of the Apocalypse.

Shang Heng, head of the archaeological project and associate researcher of the Beijing Institute of Archaeology, introduced that the archaeological team’s archaeological work in the first phase of the Dazhuangke Great Wall research repair project has ended, and a number of research results have been achieved, not only The architectural form of the Great Wall and the foundation method of the enemy platform were determined, and the state of the abandoned Great Wall and the collapse process of the enemy platform were also innovatively simulated, restoring the complete life course of the Great Wall of Dazhuangke.