This article was written by Karl

For a long time, colleagues in thyroid and breast surgery have found that more and more patients with early-stage thyroid cancer are being admitted.

The diagnosis of “thyroid nodule” is appearing on more and more people’s medical reports. Even many patients with nodules smaller than 1 cm have a strong desire for biopsy. Most of the pathological results of fine needle aspiration biopsy are “papillary thyroid carcinoma” with a low degree of malignancy.

However, the reality is just the opposite, and the incidence of large tumors has also maintained a steady upward trend. [2]

From a causal logic, it may be more than just the detection rate that increases the incidence of cancer.

The year-over-year increase in data suggests that there are other risk factors contributing to the increased prevalence of thyroid cancer, perhaps more frequent nuclear medicine examinations leading to increased radiation exposure, or industrial Development has led to increased occupational exposure. [3]

More and more people are dying of cancer.

A month ago, The Lancet published a survey entitled The global burden of cancer attributable to risk factors, 2010–19: a systematic analysis for the Global Burden of Disease Study 2019 The report analyzed cancer cases over the past 10 years. [5]

Using estimates of cancer cases and deaths in more than 200 countries around the world, researchers found that in 2019, the 34 risk factors included in the analysis were responsible for 4.45 million deaths, It accounted for 44.4% of all cancer deaths, 50.6% among men and 36.3% among women. At the same time, these risk factors resulted in 105 million DALYs.

Nearly half of cancer deaths are preventable

Reportedly, a large portion of the global cancer burden, including nearly half of all cancer deaths, has the potential to be prevented through interventions.

For example, among these risk factors, the top three causes of death and DALYs are smoking, alcohol consumption, and being overweight (high BMI).

Smoking is associated with approximately 80 to 90 percent of lung cancer deaths in the United States. Smokers are less likely to develop or die from lung cancer than non-smokers15 to 30 times as much. Even smoking a few cigarettes a day or smoking occasionally increases your risk of lung cancer. The more cigarettes a person smokes per day and the number of years, the greater the risk.

In addition, smoking can cause cancer in almost any part of the body. Smoking causes cancer of the mouth and throat, esophagus, stomach, colon, rectum, liver, pancreas, larynx, trachea, bronchus, kidney and pelvis, bladder and cervix, acute myeloid leukemia . The accumulation of this series of tumor lists, coupled with the global prevalence of smoking culture, makes the harm of smoking to people around the world always high. [6] 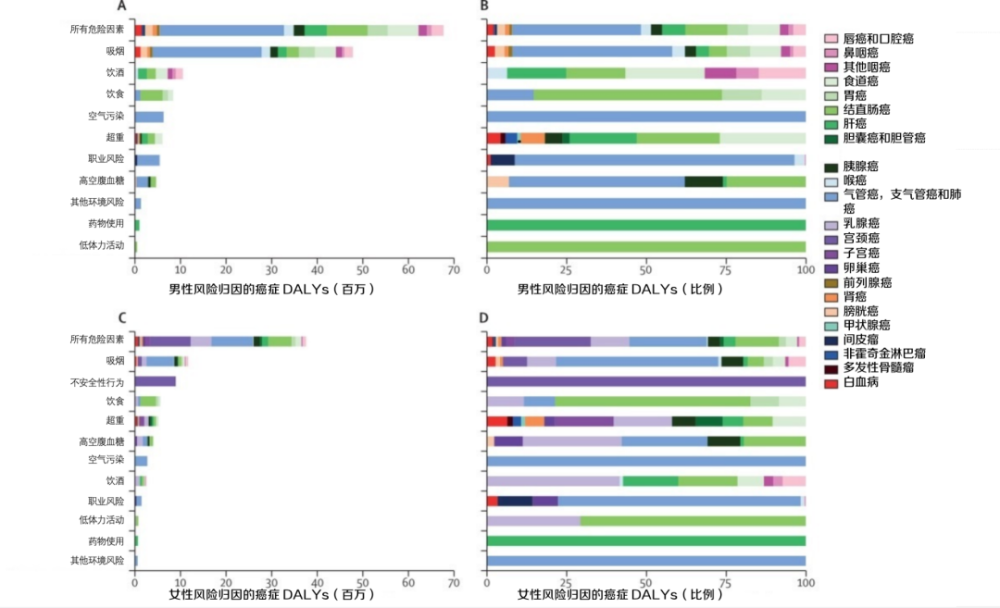 The global risk-attributable proportion of risk factors for cancer death is similar. The report argues that these factors are likely to be prevented through interventions.

Admission review for 3 days, relapse on the day of discharge?

Take smoking as an example, everyone’s understanding of the harm of smoking is probably like the phrase “smoking is harmful to health” printed on cigarette packs: I see it, but I don’t fully see it. Most people, even doctors, still need to smoke.

“Cigarette delivery culture” is one of the objective reasons. Sometimes hiding in the corridor and smoking together in Lala’s home can indeed quickly shorten the distance with colleagues and superiors, and what’s more “Quitting alcohol is quitting friends.”

Of course, there are also subjective reasons. Survivorship bias is prone to exist when the problem of prevention is not directly causally related to the disease. “Smoked and drank everything, and lived to be 100 years old” is a classic case that many smokers and drinkers and even my colleagues like to talk about.

In addition, I want to talk about a more practical point: at the diagnosis and treatment level, doctors will be less involved and more difficult to prevent patients.

In cancer prevention, we usually pay more attention to secondary prevention measures such as cancer screening, while neglecting primary prevention related to personal behavior such as smoking and obesity. “Take care but neglect management”. Even in hospitals where smoking is prohibited, opening the toilet door can often lead to the pungent smell of smoke.

A colleague once shared with me a “new disease smoking cessation method” for an elderly patient with coronary heart disease: Review for 3 days after admission, and resume smoking on the day of discharge. After being asked and told seriously, the reply “I can’t help but smoke a few times, the disease has been cured anyway.” The story of the three Bian Que brothers was mentioned in He Guan Zi Shi Xian XVI. Bian Que said: “The eldest brother treats the disease as a spirit, but he does not have a form to get rid of it, so the name does not come from the family. The middle brother treats the disease, it is in the hair, so the name does not come from Lu. If you are a Bian Que, the blood is the blood. Poison, sub-skin, leisurely and famous among the princes.”

The patient longed for Bian Que, but the doctor wanted to be the eldest brother of Bian Que. (planner: carollero; producer: gyouza)

According to the results of this study, the majority of tumor burden cannot be avoided, even after controlling for risk factors. so primary preventionThere is no doubt about the need to push. But how to do this effectively is not just a medical problem, but a social one.

The source of the title map: Figure Worm Creative