Myopia is the first reaction of many parents when their child’s vision declines. Chen Fang (pseudonym), who lives in Shunde, Foshan, did not expect that the cause of his 10-year-old son’s vision loss turned out to be a brain tumor.

On September 29, the reporter learned from Guangdong Sanjiu Brain Hospital that the hospital recently admitted a patient with craniopharyngioma. The doctor reminds that myopia is a relatively slow process. If the child’s vision drops sharply, it is recommended to check whether it is an intracranial tumor in time.

This summer, Chen Fang found that her son was lying low when he was doing homework, and he was very close when he was playing with his mobile phone, thinking that he might be short-sighted. Chen Fang didn’t want her son to wear glasses too early, so she bought eye drops hoping to relieve her son’s eyestrain. But after school started, the teacher told Chen Fang that her children had been sloppy in their homework recently, and their handwriting was crooked.

Chen Fang believes that her son’s myopia may have deepened. After careful inquiries, she learned that her son’s vision had dropped sharply a day or two before the start of school. But for fear of the parents worrying, he didn’t say it. After school started, he couldn’t read the words on the blackboard while sitting in the first row, so he struggled to learn.

After realizing the seriousness of the problem, Chen Fang immediately took her son to a nearby hospital for treatment. The ophthalmologist’s examination found that the child’s left eye was blind, and the right eye could only see objects within 2 meters. Doctors believe that the cause may be in the brain.

In order to seek further diagnosis and treatment, on September 11, Chen Fang brought her son to Guangdong Sanjiu Brain Hospital to seek medical treatment. Admissions. Combining the symptoms and imaging data, Ouyang Hui believes that it is more likely to be a craniopharyngioma.

After completing the relevant examinations, and after full communication with the family members of the children, the ten-department neurosurgery team of the hospital carried out “neuroscopic transsphenoidal tumor resection for the children”. According to Ouyang Hui, this is a precise and minimally invasive operation. During the operation, a “hole” is made from the child’s nostril into the cranial sella area, and then the tumor is removed. The surgical trauma is small, and the child recovers quickly after the operation. Postoperative pathological diagnosis confirmed that the tumor was a craniopharyngioma. 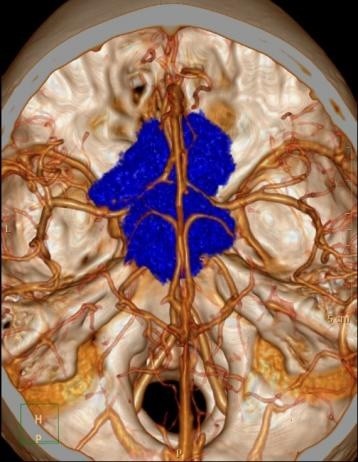 Preoperative examination image, the blue area is the tumor

“I never thought that the vision loss may be a problem with the head.” After learning of her son’s cause, Chen Fang felt regret for not seeking medical attention as soon as possible. After the operation, the visual acuity of the child’s right eye improved significantly, the left eye recovered from no light perception to light perception, and the handwriting became neat and no longer skewed.

Ouyang Hui introduced that larger craniopharyngiomas are easy to compress and damage the optic nerve, so most patients will have symptoms such as decreased vision and visual field defects. In adolescents, craniopharyngiomas can also affect growth and development. He reminded that vision damage caused by craniopharyngioma is often difficult to recover once the best time for treatment is missed. If the child’s vision is rapidly declining, parents must take the child to seek medical attention in time.