Recently, the topic #Su Bingtian is a descendant of Su Shi# has attracted widespread attention, and tens of thousands of netizens have participated in the discussion. 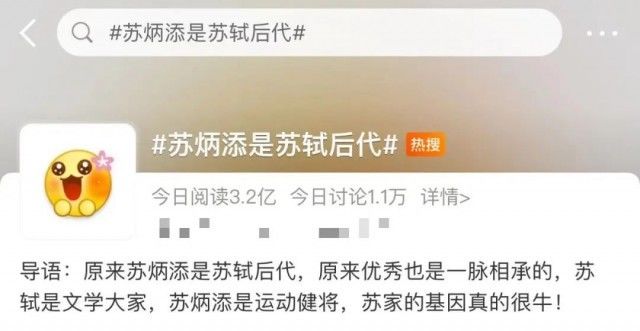 A netizen posted a photo of Su’s ancestral hall in a certain place, which recorded Su Bingtian as the twenty-ninth generation grandson of Su Shi, a famous poet in the Northern Song Dynasty. 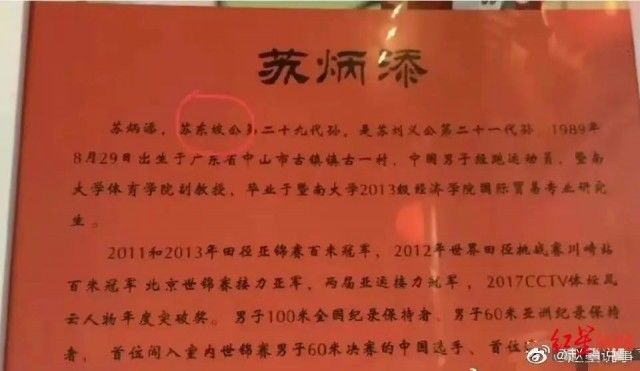 Later, some netizens said: Su Shi is equally good at running, after all, “bamboo sticks and mans shoes are lighter than horses”…

Some netizens also questioned this, saying, “I’m afraid Su Bingtian is the last person to know about this.”

Is Su Bingtian a descendant of Su Shi? Are the photos of ancestral halls on the Internet reliable? The reporter noticed that as early as October last year, there was such news, but no official verification was found.

According to Red Star News, the staff of the village committee of Su Bingtian’s hometown, Guyi Village, Zhongshan, Guangdong, said that they “do not know whether Su Bingtian is a descendant of Su Shi.”

“There are many descendants of Su Shi. Among modern people with the surname of Su, there must be someone who is his descendant, but it is difficult to accurately judge. It is relatively difficult for a modern person with the surname of Su to accurately judge whether he is a descendant of Su Shi or not. Among them, genealogy has considerable reference value, but not any genealogy can be taken seriously. Because genealogy is easy to be missing, and some are retrospectively recognized by descendants. Especially in relatively distant ancient times, the people who wrote genealogy were often scholars in the countryside. , there will be more distant people with the same name drawn into the genealogy. It is true and false, and scholars need to make a certain comparison and professional judgment to ensure that there is no fabrication or missing.”

“For people like Su Shi, he left his hometown of Meishan very early, and went to the north, the central plains, the south, and even Hainan Island. Can his genealogy continue to the present? , how reliable it is, I personally think it is questionable.”

Liu Chuanmei, a native of Meishan, Sichuan and the author of “Three Sus”, believes that it is possible to judge Su Bingtian as a descendant of Su Shi according to the genealogy, but the premise is that “this genealogy is true, accurate and complete. “

Statue of Su Shi in the National Museum of China

On August 10, some media issued an article saying:

When recognizing one’s ancestors, one is proud of recognizing famous people. Among them, there is an intention to inspire future generations to work hard and live up to the sages, not just to climb the dragon and follow the phoenix. Su Bingtian is a famous trapeze man who has won a lot of glory for the country. Even if there is a saying that he is a descendant of Su Shi, he still has a good wish to live up to the glory of his ancestors.

For Su Bingtian, he has done his best, worthy of his ancestors, and worthy of the country’s training. Whether Su Bingtian, other athletes, or celebrities who have won glory for the country in all walks of life, they are all descendants of the Yellow Emperor and descendants of the dragon. It is enough to have this one label. There’s no need to ask them which celebrity ancestor they are.

One walks briskly, the other keeps making progress,

After the hot search,

Maybe it’s the best connection between the two.