The Hong Kong Department of Health announced on April 14 that Hong Kong’s first case of Omicron BA.5 variant infection, a 24-year-old who arrived from South Africa Hong Kong men have a higher viral load. BA.5 virus is a variant strain listed by WHO to be observed, and there is little information about it at present, with only dozens of cases in the world.

Recently, Trevor Bedford, a virologist at the Fred Hutch Institute in the United States, analyzed several Omicron mutants in his personal Twitter. 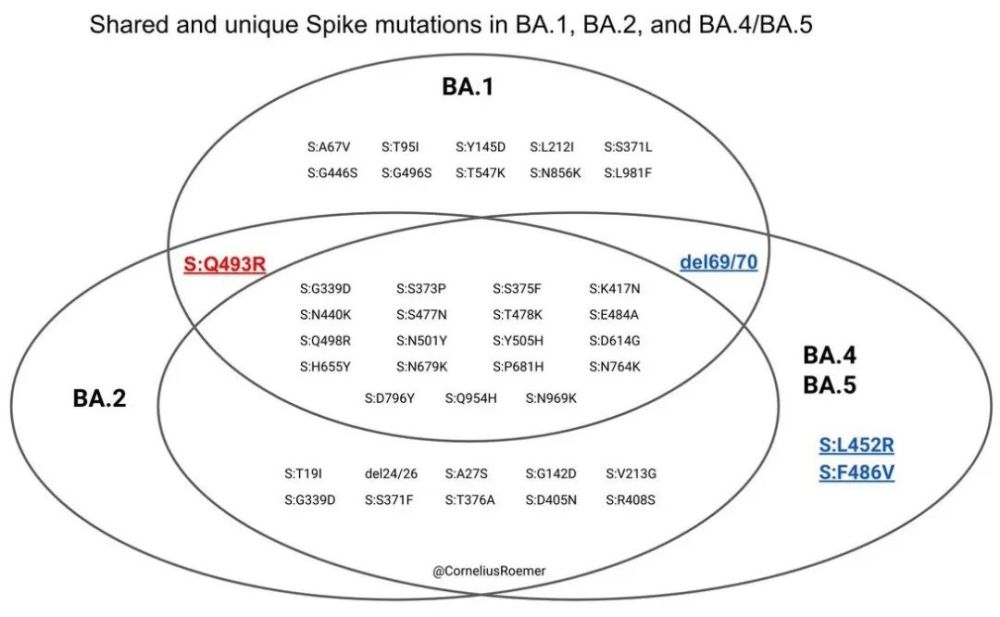 Trevor Bedford’s new molecular epidemiological predictions for multiple Omicron subtypes are important, and this explanation is particularly recommended as it directly relates to the course of the global epidemic in the coming months .

The most important of these subtypes is the 452 mutation, which is critical. And here it involves BA.2.12.1 (a sub-subtype of the BA.2 subtype) found in New York, and BA.4 and BA.5 found in South Africa that many people often ask about.

Omicron can quickly become a global epidemic strain, in addition to its rapid spread, more importantly, it has a significant immune escape, thereby escaping the humoral immune barrier established by previous strain infections.

Interestingly, the substitution of BA.2 for BA.1 is not due to immune escape (the S1 subunit that determines the properties of immune escape is found in BA.2 and BA.1 The difference was small before), but simply because BA.2 spreads faster, and BA.2 has even slightly lower immune escape than BA.1.

The current BA.2 subtype has undergone further intra-branch mutations, resulting in the formation of 21 sub-subtypes with similar virological characteristics to BA.2.

BA.4 appeared in Gauteng, where Omicron was discovered last year, and BA.4 had accounted for 60% of local detections as of April; BA.5 was prevalent in KwaZulu-Natal, until April. April already occupied 55% of the local.

BA.4 has a relative growth rate of about 0.09 and BA.5 is 0.11, about the same as BA.2.12.1. Therefore, it can be seen that the L452 mutation has similar effects on the molecular prevalence of these three subtypes.

Bedford predicts that strains with key mutations in Omicron superimposed on Delta, such as BA.2.12.1, BA.4, and BA.5 with the L452R/Q mutation, have a greater transmission advantage, Therefore, it may become the main popular mutant in the future;

But it is also possible that other mutant isoforms of Omicron will appear to compete with Omicron carrying L452R/Q. However, with the intensification of the evolution of Omicron subtypes, Omicron increasingly shows the characteristics of influenza antigenic drift, and the virulence tends to be stable or weakened, This epidemiological trend is more and more like seasonal influenza.

I would like to add one last point, Omicron has 32 Spike mutations compared to the original wild type. From the point of view of amino acid mutation caused by single base mutation, this is already SARS-CoV-2 An extreme form of evolution.

Therefore, it has been predicted that there will be no other VOC mutants to replace Omicron in the future, and even Omicron will undergo reversion.

Judging from the molecular epidemiological data of Omicron’s epidemic for 5 months, this speculation is indeed gradually verified. The newly emerging mutant strains are all based on Omicron. mutant subtypeOr a mixture of Omicron and other mutants.

Maybe the future trend of the virus is the new subtype Omicron+L452R/Q.

Although these new subtypes are still not the final stable situation of SARS-CoV-2, and antigenic drift will continue to occur, the situation in the future may be a subtype of Omicron with transmission advantages. One type (probably due to just one amino acid mutation) gradually replaces the next, resulting in a small peak in popularity.