On April 19, an official letter signed as Midea Group’s China region circulated on the Internet.

GOME responded that “a solution is being negotiated”.

The incident started on April 15, 2022 when employees of the Jinan Gome branch physically assaulted Midea employees. 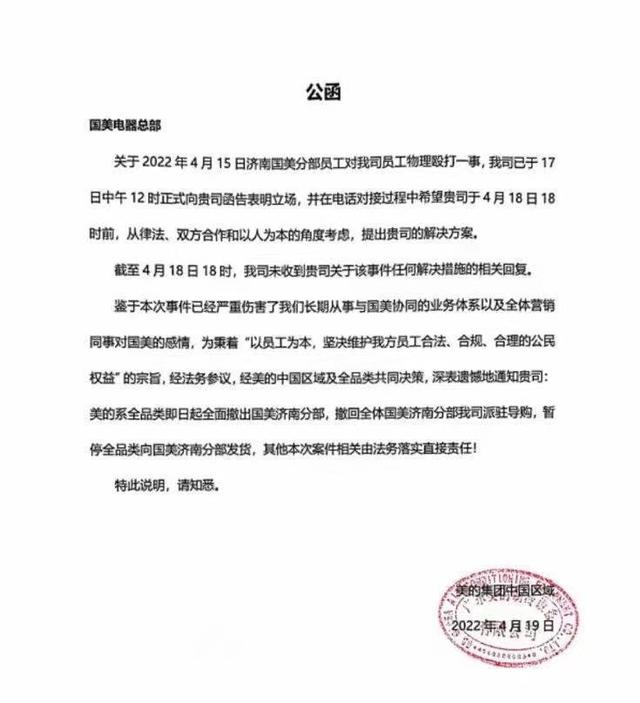 The official letter shows that Midea’s China region has officially stated its position to Gome at 12:00 on the 17th, and hoped that during the phone call Before 18:00 on April 18, GOME proposed a solution for GOME from the perspective of law, bilateral cooperation and people-oriented.

As of 18:00 on April 18, Midea’s China region has not received any reply from Gome on any resolution measures for the incident.

The official letter stated that in view of the fact that this incident has seriously hurt the business system that Midea has been engaged in for a long time in collaboration with Gome in China and the feelings of all marketing colleagues for Gome, in order to adhere to the principle of “employee-oriented, resolutely safeguard our company” The purpose of the legal, compliant and reasonable civil rights and interests of all employees”, after legal consultation, and through the joint decision of Midea China region and all categories:

On March 31, Gome announced its 2021 annual report. This is the first transcript handed over by the founder and core soul of Gome, Huang Guangyu, after returning to take charge of the company.

The financial report shows that Gome Retail will achieve sales revenue of about 46.484 billion yuan in 2021, a year-on-year increase of 5.36%; the net profit attributable to the parent is 4.402 billion yuan, and the loss narrows by 37.06%.