Hello everyone, this is Ah Jing, I don’t know if you have paid attention to the hot search list of Weibo in the past two days: There is a girl who has dysmenorrhea for 15 days a month, and it has been painful for 3 years. Taking it seriously, he was not sent to the doctor by his family until his condition worsened. As a result, a rare disease – groin endometriosis was found.

This strange disease name caught A Jing’s attention, so she quickly knocked on Dr. Yaota’s WeChat avatar and learned that it was actually a type of endometriosis. Ectopic lesions on the groin lead to various symptoms. 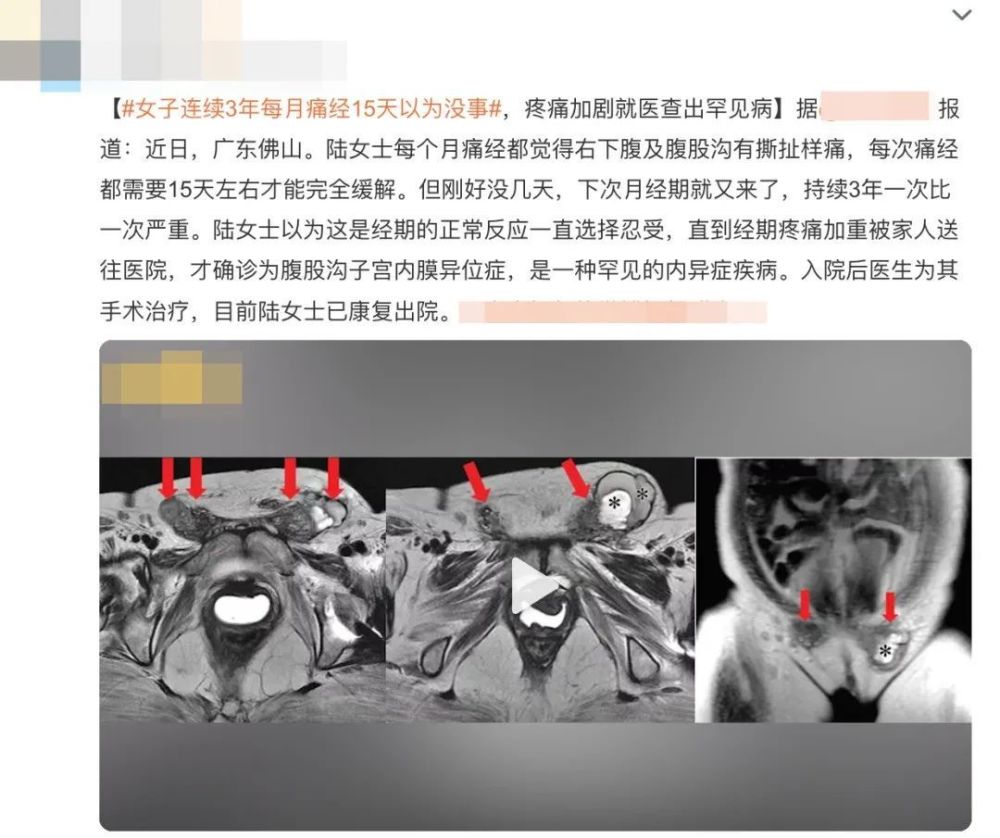 Endometriosis is not a rare disease, but its initial symptoms are too easy to ignore and lead to misdiagnosis, such as dysmenorrhea, pelvic pain, and 25% of Women don’t even have any symptoms.

Then, today’s popular science will start with a case that impressed Dr. Yaota.

The demon tower and the leaders once completed an operation that was expected to be extremely difficult.

What kind of surgery can be called a “predicted super-difficult” surgery? Is it because of malignant tumor? Is it because the patients have many comorbidities and the operation is extremely difficult?

Neither, this operation is actually just to remove a pelvic tumor, but we have organized many discussions before the operation, and have also studied with doctors in general surgery and urology. In view of the various situations that may occur during the operation, the reason why the removal of a pelvic tumor requires such a great effort is because the patient had previously suffered from endometriotic cysts of both ovaries.

Because she has never had sex, she has never had a gynecological exam. Just a few months ago, during an abdominal ultrasound during a routine physical examination, the patient was informed of a mass of approximately 10cm in each of her bilateral adnexal areas and that her left kidney had appeared. hydronephrosis.

After the initial diagnosis by the local doctor, it was considered that the two tumors in her pelvis were bilateral ovarian endometrioma cysts, and because the cysts were large, they compressed the left ureter, so resulting in hydronephrosis on the left side.

So the local gynecologist asked the urologist to put a ureteral stent in her left ureter to relieve the pressure on the left ureter, and then performed a laparoscopic surgery on her .

The degree of difficulty in the operation, Yaotaguang can know a little from the description of the local doctor’s operation records, because clinically, we have a lot of knowledge about the seriousness of endometriosis. There is a scoring system for the degree, in which level I is 1 to 5 points, level IV is >40 points, and she scored more than 100 points!

Her pelvic and abdominal conditions are a mess, and there must be adhesions everywhere, making the operation extremely difficult.

The surgery was finally done, and in order to consolidate this difficult victory, the doctor gave her 6 cycles of GnRh-a treatment to prevent the recurrence of endometriosis (subcutaneous injection every 28 days).

As a result, not long after she stopped the drug and had her menstrual cramps, she reviewed the B-ultrasound and found that there was a huge mass in the pelvis again, and the tumor markers were slightly elevated , what is this huge mass? Did the endometriotic cyst recur? Or did the adhesions in the pelvis and abdominal cavity form again after the last operation? Or is it really a new ovarian tumor?

The truth is, The last surgery and endometriosis caused severe intestinal adhesions, forming a sticky-packed fluid.

During our operation, it took half a day to separate the intestinal adhesions, and we barely saw the uterus and bilateral appendages. Fortunately, the operation went well and she recovered well.

Okay, after the case is over, let’s learn knowledge together.

When endometrial tissue (including endometrial glands and stroma) occurs outside the uterus, it is called endometriosis.

Why can the endometrium be ectopic?

In fact, there are different opinions about why the endometrium can be ectopic. So far, there is no unified view in the medical community, but there are indeed many theories.

The theory of planting

The central idea of ​​this theory is that the endometriotic lesions escape from the uterus through various ways and then run to various parts of the body, regardless of whether Whether it is through the reflux of menstrual blood, through our lymphatic and blood systems, and even the implantation of some endometriotic lesions is closely related to our medical procedures, such as cesarean section and labor perineal incision of endometriosis.

The theory of coelomic metaplasia

Simply put, it is the story of the potential stock in the ovary and the pelvic cavity and peritoneum, which are turned into normal under the stimulation of menstrual blood.

The main purpose is to show that endometriosis can be caused by a combination of genetic factors and the environment.

Where can the endometrium ectopic?

But otherwise, it can be like a malignancy that “metastasizes” everywhere eg bladder, kidney, ureter, lung, pleura , breasts, and even arms and thighs.

For this reason, endometriosis is also known as a “benign disease with features of malignancy”. If you have discomfort in a certain area with the change of menstrual cycle, you need to highly suspect the possibility of endometriosis.

Although endometriosis is not a rare or uncommon disease, in fact, many women have certain misunderstandings about it.

If your dysmenorrhea symptoms are the same as what the demon tower said, don’t listen to the wrong view of the older generation that “you will be fine after giving birth”,

Adolescents do not have endometriosis

This is also a common misconception that many young women, especially underage women, whose secondary dysmenorrhea is often overlooked, is always Under the suppression of the three magic weapons of “painkillers, warm water bags, and forbearance”, he never sought medical treatment.

Here, the demon tower not only reminds young women who have a similar situation, but also reminds some mothers that if this happens to you or your daughter, don’t take it for granted and don’t ignore it , it is best to seek medical treatment in time, so as not to miss the best opportunity for early treatment.

Menstrual intercourse can cause endometriosis

This view is wrong! Big mistake!

Severe endometriosis, if surgical treatment is required, this operation is no less difficult than a malignant tumor operation.

Because of endometriosis, in simple terms, it’s like lots of tiny uteruses growing in your pelvic abdominal cavity or even in the deep tissue of your pelvic floor , they will repeatedly proliferate, fall off, and bleed according to the changes in your menstrual cycle. This cycle will cause them to form serious dense adhesions with surrounding organs. Basically, ten patients with endometriosis, There are serious adhesions in nine of the pelvic and abdominal cavities.

And this serious adhesion will inevitably affect the doctor’s judgment on the anatomical structure, and when two tissues are densely adhered, no matter how careful separation occurs, one of them will be ruptured and damaged. . Therefore, surgery is very difficult, and even the most skilled surgeons would rather perform cancer surgery than face such complex and difficult challenges.

Endometriosis gets better after menopause

Actually, it stands to reason that after menopause, hormone levels drop, and endometriosis lesions will gradually shrink. The cyst came for surgery, but in the end it was found that the lesion was a chocolate cyst that was not found when I was young. Therefore, If a problem is found, it should be actively dealt with instead of passively waiting for menopause.

Endometriosis is indeed a terrible disease. Although it is benign in most cases, because of its unique characteristics, whether it is a patient or a doctor, They all hated it.

Here, Yaota recommends that if you find yourself suffering from endometriosis, first don’t panic, seek medical attention actively, and achieve early detection and early treatment, let us strive to control the disease within a controllable range.

Don’t procrastinate again and again, let alone choose some proprietary Chinese medicine treatment methods blindly, otherwise, only our own health will be delayed and consumed in the end.

I love the world!