When I woke up in the morning, I wanted to put on beautiful makeup, but when I saw the “pox” on my face, I suddenly ruined the good mood of the day.

Acne, also known as acne, is a chronic inflammatory disease of the hair follicles and sebaceous glands. Adults also have acne. Once acne appears, it will affect the appearance, sometimes accompanied by redness, swelling and pain, which is really annoying.

Some acne can be healed by itself. If the skin on the face is usually smooth, but a few acne or pimples appear occasionally, it can usually be healed by correcting bad living habits, eating lightly, and paying attention to skin cleansing. But if your acne breaks out repeatedly, keeps increasing, and you find that you have more body hair than most of the girls around you, you must pay attention, because it suggests that you may have a gynecological endocrine disease – polycystic ovary syndrome.

What is polycystic ovary syndrome?

Polycystic ovary syndrome (PCOS) is a common reproductive, endocrine and metabolic disease in women, which usually occurs during adolescence. It is characterized by excessive androgen levels, persistent anovulation, and ovarian polycystic manifestations. Its exact etiology is still unclear, but it is mostly believed to be related to genetic, environmental and other factors. 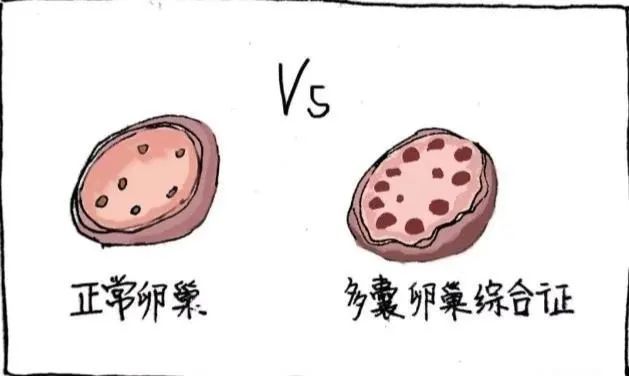 Why does polycystic ovary syndrome cause acne?

Polycystic ovary syndrome can cause excessive androgen in the patient’s body, so hyperandrogenism is prone to occur, which can easily increase the secretion of sebum, resulting in excessive oil on the face, back, chest and other positions of the patient, and hair follicles. The sebaceous ducts become clogged, and bacterial infection triggers an inflammatory response that leads to acne.

What are the dangers of polycystic ovary syndrome?

Polycystic ovary syndrome in women is more harmful, in addition to causing acne, hirsutism, hair loss, obesity, menstrual disorders, infertility and so on. In severe cases, diseases such as diabetes, cardiovascular disease, and endometrial cancer may occur in the long-term. Therefore, we must be vigilant, conduct timely physical examinations, and receive timely treatment.

Acne is a normal physiological phenomenon, but if your acne breaks out, keeps increasing, and appears If you have the above symptoms, you should be vigilant and seek medical attention in time~