The patient with a foreign body in the esophagus was 73 years old. She had sudden throat pain and a strong foreign body sensation when she ate breakfast. At the time, I just thought it was a scratch, and it would get better after a while, so I didn’t take it seriously. However, after a few hours, not only did it not improve, but the pain intensified when swallowing. Accompanied by his son, the patient rushed to Shandong ENT Hospital.

The patient’s breakfast is noodles. In order to facilitate eating, the family deliberately cooks the noodles until soft. Under the questioning of Director Cui, the patient recalled that he had eaten jujube the afternoon before. Is it stuck by the jujube core? In recent years, the jujube cores of jujubes such as Xinjiang Huizao are slender, which is a common foreign body in the esophagus of the elderly. Within a week, Director Cui has dealt with 3 cases of jujube cores stuck in the esophagus. Director Cui arranged surgery for the patient as soon as possible. After the foreign body was removed, Director Cui was “stunned”. It turned out to be a little crab! The small crab is about 1 cm long and stuck in the entrance of the esophagus horizontally. “We have taken out crab claws and crab shells. This is the first time for this kind of small crab.” Director Cui said. 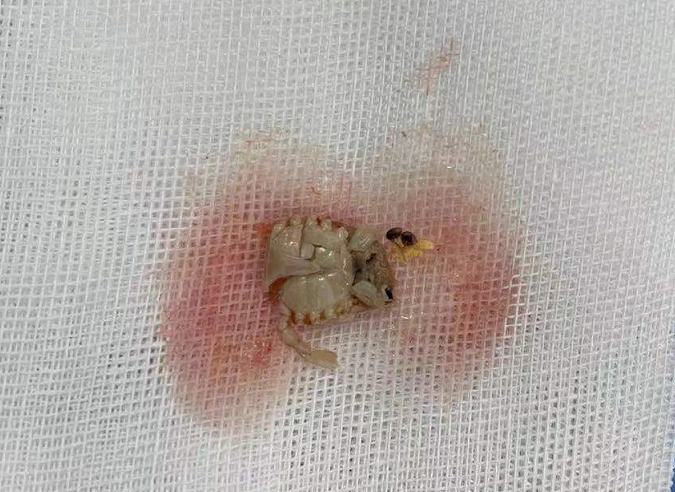 The foreign body in the esophagus not only causes great pain for the patient, but also affects eating. What’s worse, over time, foreign bodies can easily pierce the esophagus, causing esophageal perforation or even massive bleeding. Although the edge of the small crab was sharp, the esophagus was not damaged due to the timely treatment of the patient, and he was discharged soon after the foreign body was removed. This patient is fortunate, but there are also patients with esophageal foreign bodies that have serious consequences due to untimely treatment.

Director Cui Peng said: “Just last week, a 78-year-old man felt a slight tingling in his throat when he ate fish, but he didn’t care about it at the time. However, after a week, the pain gradually intensified, even the neck It was also swollen, and it was even a little hard to breathe, so I rushed to see the doctor.” Director Cui admitted the patient to the hospital and arranged for a CT examination. After inspection, Director Cui found that the patient’s swallowed fishbone had pierced the back wall of the pharynx, resulting in a neck infection and an abscess formed between the hypopharynx and cervical spine. Director Cui immediately arranged emergency surgery for the patient. Through open surgical debridement and long-term postoperative dressing changes, the patient was able to save his life.

Elderly people often swallow foreign objects due to their poor chewing function and insensitivity in the mouth. Dentures, fish bones, broken bones, and date pits are all common foreign objects that are easily swallowed by the elderly. Remove dentures before going to bed, chew slowly when eating, and avoid eating foods with broken bones or thorns, which can effectively avoid the occurrence of foreign bodies in the esophagus. If you feel throat discomfort when eating, you must not take it lightly, you should seek medical treatment in time and deal with it scientifically!