It is called “Golden Blood” and is also considered a “curse”.

On August 29, the Yangtze Evening News reported that Taizhou People’s Hospital Affiliated to Nanjing Medical University recently admitted a woman with severe anemia. After examination, it was found that she belonged to the RhNULL blood type, commonly known as the golden blood type. The blood group was first discovered in 1960, and less than 50 cases have been reported worldwide.

At the same time, the woman’s ABO blood type is O, which belongs to O type RhNULL, which is even rarer in the world. Further investigation by the hospital and blood bank found that one of the woman’s sisters was also RhNULL type O, and before them, only 4 cases of RhNULL blood type were reported in China.

Clinically, the biggest feature of this blood type is that it can transfuse almost everyone. But when patients need blood themselves, they can only rely on people of the same blood type – fewer than 50 cases worldwide.

In 2021, the journal Laboratory Medicine reported a case in which a 77-year-old woman was admitted to the hospital with a subdural hematoma and required a platelet transfusion and possibly red blood cell transfusion. But she is RhNULL blood type.

By coincidence, doctors discovered that a paper published in 1967 had reported her RhNULL blood type, and another woman with RhNULL blood type was included in the investigation that year. They became friends, and more than 50 years later, the two families still have ways of connecting with each other.

In this case, the doctor contacted “this friend”, who said that she had donated blood at the local blood center to make a reserve for use. At the same time, the doctor also learned another detail-decades ago, when one of them became pregnant, the other acted as her designated blood donor, just in case.

What is RhNull blood type O?

Now, human beings have figured out one of the mysteries – blood type. In this case, the incidence of RhNull blood type is about 1 in 6 million, and the O type RhNull is even less. now…

Blood types are related to red blood cells. The surface of red blood cells is covered with antigens. The presence or absence of specific antigens determines the blood type – type A blood has only type A antigen, type B only has type B, type AB has both, type O has none – type O is also known as “universal” blood type”.

In addition, red blood cells have another antigen called the RhD protein. If present, it is called Rh positive (+), otherwise it is Rh negative (-). All of the above typical combinations make up the eight most common blood types (A+, A-, B+, B-, AB+, AB-, O+, and O-).

Due to its rarity, the RhNull blood type is an invaluable sample for scientific research.

Previously, scientists from the Chinese Academy of Medical Sciences published two papers in 2011 and 2016 detailing the blood of a Chinese RhNull individual to explore the genetics leading to the RhNull blood group feature. 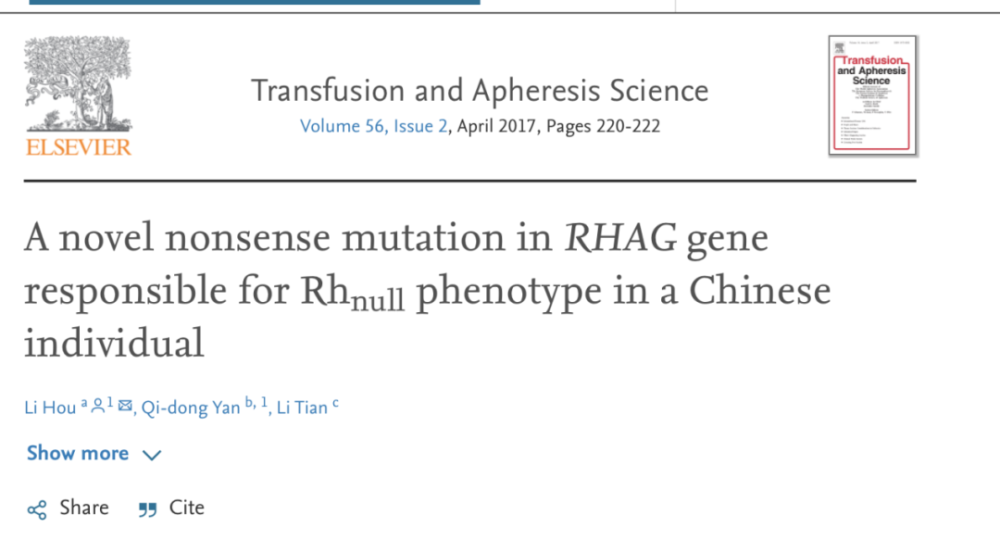 Because there are neither A, B type antigens nor antigens on the Rh system, when this group is used as a blood transfusion, it can be used by anyone and will not trigger rejection. . Conversely, when people with other blood types give them blood transfusions, the results can be fatal.

“Curse” seems to be more than that. Until 1961, doctors believed that people who lacked all Rh antigens would never even survive from the womb.

MedicineNet reports that if the mother is RhNull and the fetus is Rh positive, the mother’s blood may be sensitized to the baby’s positive blood during delivery, producing antibodies. When the mother wants to conceive a second child in the future, the antibodies may harm the fetus and cause a miscarriage.

Also, while experts in the medical community encourage people with the RhNull blood type to donate blood as a future reserve—whether for others or for themselves, research has found that because the Rh protein has a role in red blood cell membranes Important structurally, people with RhNull often experience a drop in hemoglobin and, from birth, may face severe or moderate anemia, which further makes it difficult for them to donate blood.

In December 2021, Malaysia reported the only woman with RhNull blood type in the country. She has actively participated in blood donation since 2016. At that time, a total of 43 cases of RhNull blood type were reported worldwide, only 9 people are active in”Blood Donation”. She is also one of them.

Her blood will reportedly be kept in a liquid nitrogen tank at minus 80 degrees for up to 10 years.

While this blood can be used by almost anyone, “it will only be given to patients in extreme cases, and with very careful consideration, because it is too precious to have a substitute.” “It’s golden blood,” says Dr. Thierry Peyrard of the National Laboratory for Immunohematology in Paris.

According to a report by the International Society of Blood Transfusion (ISBT) at the 2012 International Congress, on the question “What is the hardest blood type to find?”, 11 out of 17 countries RhNull was reported by 1, including China.