Patient, a 69-year-old female with a history of right breast cancer resection, developed cough and expectoration, and was referred to our department due to abnormal chest shadows (Figure 1A, top left). General laboratory tests showed a C-reactive protein level of 0.92 mg/dl. CT showed cavitary lesions in the upper lobe of the left lung, multiple nodules and consolidations in the lingual lobe (Fig. 1A, upper right). Suspected nontuberculous mycobacterial (NTM) lung disease, repeated sputum tests for acid-fast bacilli (AFB) (smear, culture, and PCR) revealed no mycobacteria. Bronchoscopy was performed, and Kinyoun’s modified Ziehl–Neelsen staining detected filamentous branching microorganisms in the bronchial lavage fluid (Figure 1A, lower panel). AFB culture and PCR results of lavage fluid were negative, but bacterial culture of Gram-positive bacteria was positive. The isolate was identified as Nocardia by 16srRNA gene sequencing, and pulmonary nocardiosis was diagnosed. According to the drug susceptibility test results, the patients were treated with imipenem for 2 weeks and then switched to oral faropenem. After 2 months, CT showed improvement in each lesion (Fig. 1B). 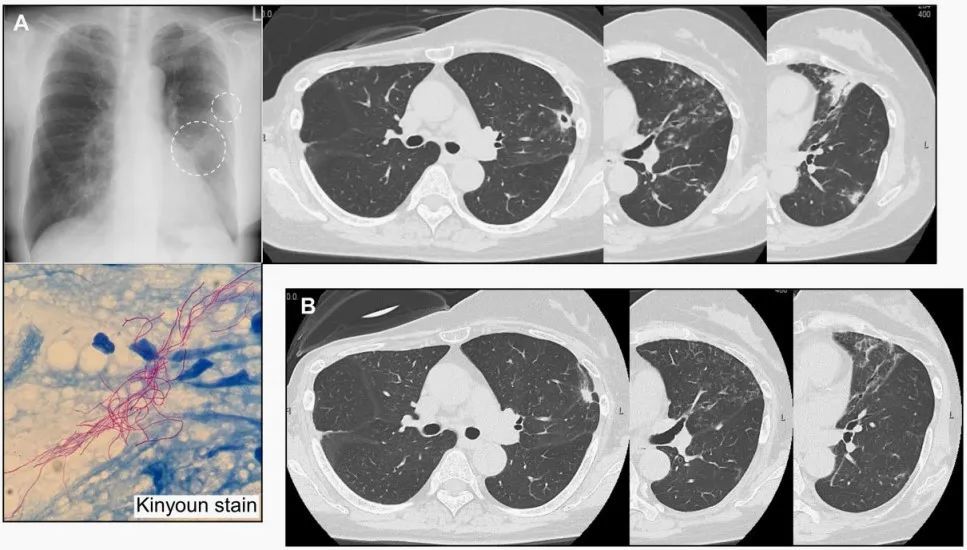 Nocardia is a gram-positive aerobic bacterium commonly found in soil, water, or air. Mycelium can form in the air, and human inhalation mycelium fragments are the main infection route, and it can also enter the human body through damaged skin or digestive tract, usually sporadic. The disease is more common in patients with immune dysfunction, and susceptible factors are the application of corticosteroids, immunosuppressants or broad-spectrum antibiotics, kidney transplantation, malignant tumors, AIDS, etc. For example, this patient had a history of right breast cancer resection.

Pulmonary nocardiosis is the most common clinical manifestation of Nocardia infection, often causing cough, expectoration, shortness of breath, chest tightness, fever and night sweats, weight loss and symptoms such as progressive fatigue, have no obvious specificity.

The CT imaging of pulmonary nocardiosis is diverse. Immunosuppressed patients often have bilateral lung consolidations, nodules, masses, and cavitation, whereas the nodular/bronchiectatic pattern is often observed in immunocompetent patients. In nocardiosis, which predominates in the middle and/or lingual lobes, it needs to be differentiated from NTM lung disease. Some cases involve mixed infection of NTM lung disease, and some are only colonized, so the diagnosis of similar cases is challenging, and nocardiosis should be considered in the differential diagnosis of NTM lung disease-like lesions regardless of NTM test results.

Pulmonary nocardiosis is easily misdiagnosed in addition to the NTM lung disease considered in this case due to atypical clinical symptoms and imaging findings of pulmonary nocardiosis For diseases such as actinomycosis and pulmonary tuberculosis, attention should be paid to differentiation from other lower respiratory tract infections. The possibility of Nocardia infection should also be considered in immunocompromised patients with acute, subacute, and chronic pneumonia.

The diagnosis of Nocardia infection is currently mainly based on microbiological examination. Traditional methods mainly rely on smear, culture, and biochemical reaction identification. Development, whether mass spectrometry identification of cultured colonies or direct high-throughput sequencing of specimens, the application of new methods has greatly improved the speed and accuracy of identification.