Just now, the Shijiazhuang Public Security Bureau notified: “Hebei Hehe Medical Laboratory tested positive for a mixed tube and failed to report it, resulting in community transmission on September 21. The laboratory is suspected of violating the law and the Shijiazhuang police A case has been opened for investigation.”

Because of this concealment, a positive infected person went to Xinji to attend a training meeting for 200 people under unknown circumstances, which eventually led to the outbreak of the epidemic. Mark Twain said: It’s not the unknown that gets you into trouble, it’s what you’re sure of, not what you think.

This has happened in many places.

Like this April. Hefei has reported the issue of Hehe nucleic acid testing. 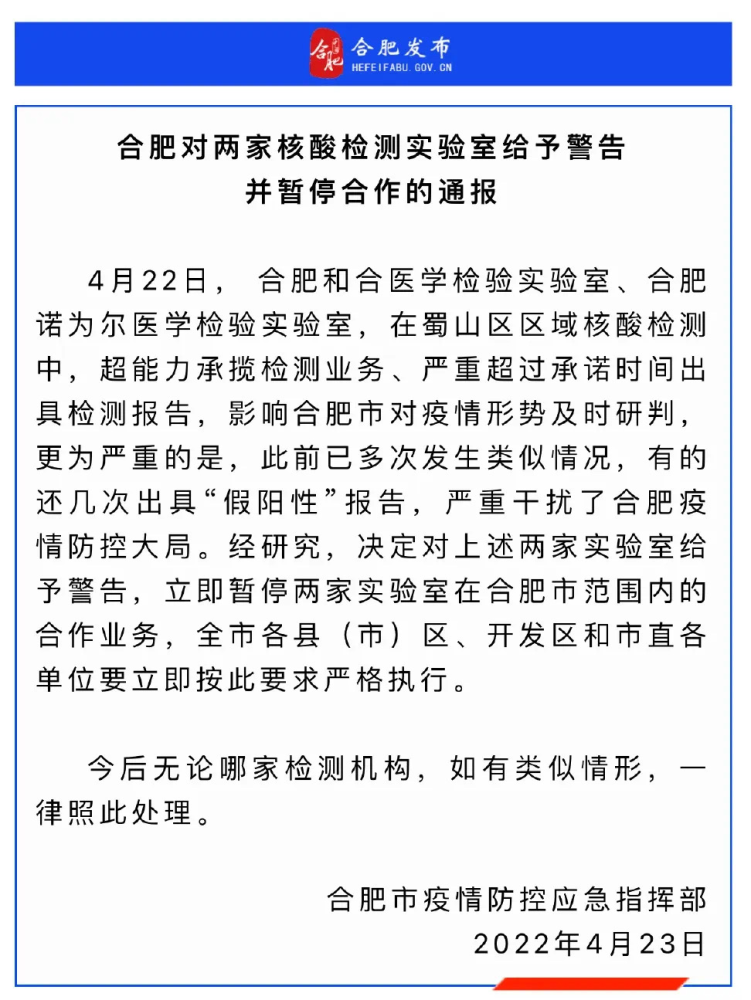 At that time, it aroused strong indignation and all kinds of suspicion. Including saying that if the right to rain is given to the umbrella seller, the rain will never stop. Some people say that if SARS also had nucleic acid testing back then, is SARS still alive today?

Some people even cite the example of snake eradication in India. In order to eliminate cobras, the Indian government rewarded snake catchers with a lot of money, which eventually led to some people raising snakes to catch snakes, forming the “cobra effect”.

In this notification from Shijiazhuang, there is a key content that cannot be ignored, that is, this “Hehe Medical” nucleic acid test found a problem, not an internal report, nor anyone The discovery of conscience was an unexpected gain when “Shijiazhuang organized experts from the Health and Health Commission and the Public Security Bureau to supervise and inspect nucleic acid testing institutions in the city”.

This is the most terrifying place to ponder.

Is this world scary about viruses or people?

What did that sentence say?

Accidentally found a cockroach, how many such cockroaches are hidden elsewhere?

When I was young, I always thought that there were only 108 people in Liangshan, but later I learned that these 108 people are those who can drink in big bowls, eat meat in big bowls, and share gold with big scales.

Such a nucleic acid testing agency at the aircraft carrier level actually detected a mixed tube positive and did not report it. Would you believe it if it weren’t for the official announcement of the police in white letters on a blue background?

In the diagnostic industry, there is a famous saying: An inaccurate result is better than no result.

Since this year, more than 100 nucleic acid testing institutions have been found to have problems. What is more shocking is that in May this year, Beijing Zhongtong Lanbo Medical Laboratory Co., Ltd. Zhang Moumou, Tong Moumou and other 3 people, in order to save costs, speed up the schedule, and seriously violate the new coronavirus inspection operation specifications, even when they know that the excessive mixed inspection may lead to inaccurate test results, they still adopt the method of multi-tube mixed inspection. He was arrested by the People’s Procuratorate of Fengtai District, Beijing on suspicion of obstructing the prevention and treatment of infectious diseases.

Subsequently, in June and July, Hunan, Liaoning, Shaanxi and other places carried out investigations of nucleic acid testing institutions, and found that many institutions had serious problems. Then why the positive sample in Shijiazhuang, Hebei was not reported this time?

Police are investigating and the cause is subject to further investigation. My personal guess is that it is likely that the testing agency simplified the procedures, was lazy and saved trouble, and did not carefully test the collected samples, and there was a mistake.

As for what many people said, the testing agency deliberately concealed the positive results, I don’t think they have the guts.

But I’m afraid I can do great evil even if I don’t have the guts! After receiving the sample, there is no test at all, and the result is directly uploaded as negative, or even the result is not uploaded. This is the most terrifying.

A horrific and real case happened in Yongjia.

In Luoyang Village, Yongjia County, Wenzhou City, Zhejiang Province, since 2000, there have been sudden deaths of people in the village within a few minutes, 76 people in just 6 years. The bizarre death caused panic among people, and they fled one after another. Outsiders dared not approach, and they were called ghost villages.

Later, a bizarre fire caused the police to target a suspect named Ma Fuman, and the mystery was revealed.

It turned out that this Ma Fuman made a living by selling funeral items, but because Luoyang Village is located in the remote and deep mountains, the environment is good, the air is good, and the life expectancy of the villagers is generally longer, which affects him. funeral business. As a result, he had a crazy and vicious idea to put “three-step pouring” cyanide into the villagers’ drinking water or food by taking the opportunity of dispensing medicine for the villagers.

How different is the essence of this poisoning behavior from the “implementation of behaviors that cause virus transmission” by nucleic acid testing institutions?

The properties can be said to be almost the same!

In the face of great interests, people sometimes really get lost, and they can even put other people’s health and lives at risk.

Actually, it’s not that there is no solution to this problem. In this world, attitude determines everything. As long as you are willing, there are more solutions than difficulties.

In this way, who would dare to cheat and act indiscriminately?

You are welcome to say that a lot of disasters in history have been tied to the insatiable depth of desire.

It can be said that companies that do not pursue profits are not moralistic. The property of capital is profit-seeking, and as long as there is an appropriate profit, they will not hesitate to give the sling to the person who strangles them.

Therefore, some things cannot be married with capital.

Years later, the COVID-19 pandemic will surely leave a heavy mark on the history books.

It allows the world to see the selfless and brave side of countless of our medical and nursing colleagues who act in accordance with the orders and go retrograde in white clothes, and also tore the fig leaf that wraps up the greed and shamelessness of human nature for some people.

In times of disaster, money is really the best mirror.