It may become the world’s first drug that can clearly slow the course of AD, but the discussion around it is far from over. 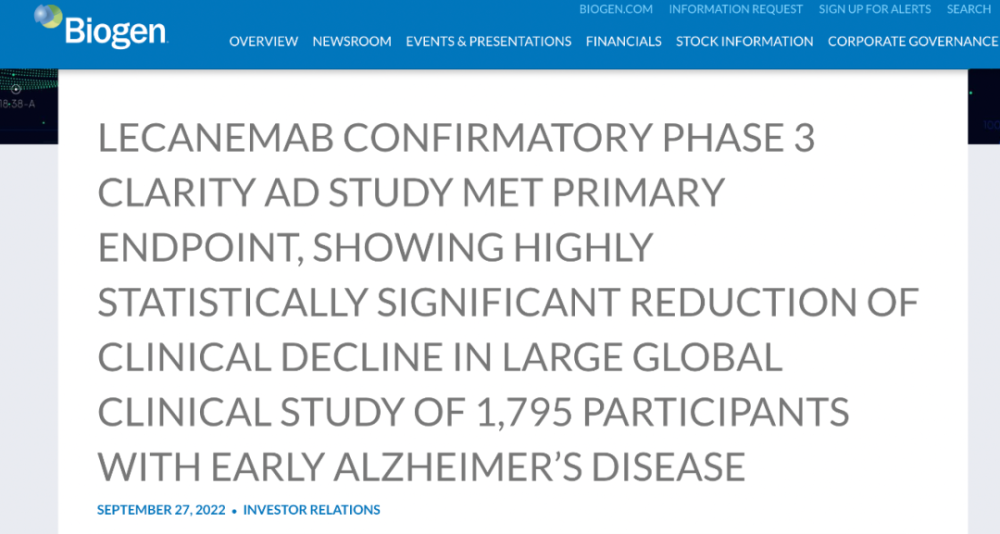 Related news quickly detonated the industry. The New York Times quoted industry estimates that any effective AD drug would be a “blockbuster” worth billions of dollars.

According to statistics, there are more than 50 million AD patients in the world, but there is still a lack of effective treatment methods. In my country, on September 20, Wang Haidong, director of the Department of Aging of the National Health Commission of China, pointed out that there are about 15 million dementia patients among the elderly aged 60 and above, of which 10 million are AD patients.

Lecanemab is a drug designed to remove beta-amyloid (Aβ). In one classic hypothesis, amyloid is a toxic protein that damages the brain, leading to AD.

The newly disclosed results of this clinical study of 1,795 patients with mild cognitive impairment or mild AD showed:

This result is widely regarded as a milestone in the industry. In the past few decades, the academic community has tried to slow the disease progression of AD patients, but almost no breakthroughs have been achieved – over time, patients will not only experience memory loss, but also may develop psycho-behavioral symptoms and even attack others.

Ivan Cheung, CEO of Eisai, said at a briefing on the evening of the 27th that the results show that AD patients can indeed control disease progression at the early symptom stage.

“This is the most encouraging finding in drug research to date,” commented the Alzheimer’s Association of America. “It has the potential to change the course of the disease and help patients remain in their early stages. The ability to live independently and participate in daily life.”

Benefits also come with some side effects. According to the report, 21.3% of patients receiving the drug experienced brain swelling or bleeding (on imaging), and about 3.5% caused specific symptoms. %. This compared to 9.3% and about 0.2% in the placebo group, respectively.

But the incidence of these side effects is lower than most of the drugs of the same type previously invested in research and development. On the other hand, the clinical use of new treatments requires more consideration of the benefit-risk ratio – when faced with serious diseases for which there is no effective treatment, the acceptance and range of side effects of specific treatments will also be higher.

Can Alzheimer’s Treatment Dilemma Be Turned Around?

Before last year, the field of new AD drugs had been blank for nearly 20 years.

Until June 7, 2021, the US FDA approved the first new AD drug since 2003, Aduhelm, through the accelerated approval channel, but it has caused major controversy in the industry about the relevant approval standards.

Like lecanemab, Aduhelm is an anti-amyloid drug, also from Biogen. In early clinical trials, Aduhelm only observed effects at the biomarker level, namely a reduction in amyloid plaques in the brain, but there was little evidence of real-world disease improvement.

Although it was approved for listing, the big controversy made Aduhelm’s commercialization road a failure. The difference is that the clinical data of lecanemab seems to be more convincing. Dr. Lon Schneider, director of the Alzheimer’s Disease Center at the University of Southern California, believes that based on the research results, the new drug seems to be able to sweep away the previous ” haze”.

It’s also worth noting that the clinical trial of lecanemab is also the largest to date, showing that clearing the brain of amyloid-formed plaques may slow the progression of AD.

In fact, the pathogenic mechanism of AD is still inconclusive, including beta-amyloid hypothesis, neurotransmitter hypothesis, tau protein hypothesis, etc. There are many different opinions. On July 21 this year, Science (“Science”) published a heavyweight article exposing an academic fraud, pointing directly at the mechanism research of Aβ56 oligomer structure.

Although Aβ56 is only one of the oligomeric structures of β-amyloid, it still undermines confidence in the β-amyloid hypothesis – which has Countless human and financial resources have been invested in the field of this hypothesis.

But some experts remain conservative for the time being.

The New York Times reports that some experts believe the drugThe ability to slow cognitive decline, “modest” at best, may not be a difference that patients with mild early stages will notice. But how much of the difference can be considered “clinically effective” is a matter of opinion.

“The discussion about this drug is not over,” said Dr. Lon Schneider. In addition, detailed findings from lecanemab will be published in a peer-reviewed medical journal this November.

It is reported that the US FDA has accepted the Biologics License Application (BLA) of the drug and granted priority review status, and a decision is expected before January 6, 2023. If the results are positive, the company will also submit a traditional approval application to the FDA by March and will apply for approval in Japan and Europe.