A few days ago, a picture from the industry media BioCentury spread in the circle of friends and attracted widespread attention. This graph summarizes the emerging new molecular therapy modalities such as cell therapy, gene therapy, and antibody-drug conjugates, and the approval trend since 2011. Trends suggest that these new types of treatments are being developed at an accelerating rate to better benefit patients around the world. 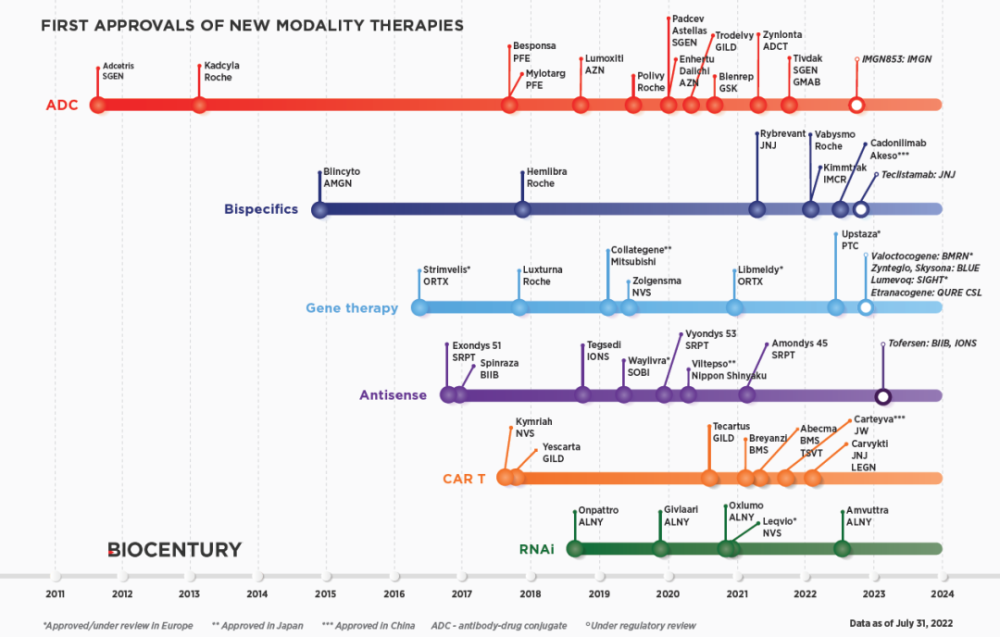 A careful analysis of this graph shows that in many cases, there is usually a window of new molecular therapy modalities after the first therapy is approved, and then the second A breakthrough occurred. After breaking the technical bottleneck of new molecular therapy development, the speed of subsequent drug approval was significantly accelerated. This is evident in antibody drug conjugates (ADCs).

Antibody-drug conjugates combine cytotoxic compounds with antibodies targeting cancer cells, with the purpose of selectively delivering cytotoxic drugs to tumor cells, where they can exert anti-tumor effects. While preventing cancer, it avoids the impact on healthy cells.

As early as 2000, Mylotarg, the first ADC therapy, received accelerated FDA approval for the treatment of patients with acute myeloid leukemia. However, due to toxic side effects, it was withdrawn from the market 10 years after its approval. The development of antibody-conjugated drugs also fell silent for a while. This is because this concept may seem simple, but it faces multiple challenges in practice. Among them, the role of the linker that couples the cytotoxic drug to the antibody is crucial.

If the linker releases the drug too early, it will produce off-target toxicity in the blood; if the drug cannot be effectively released in the target cell area, it will affect the killing effect on cancer cells. Therefore, an excellent linker needs to “never let go when it should not be released, and make a decisive decision when it should be released” for the loaded drug.

In recent years, the industry has invested a lot of R&D efforts and resources to optimize the structure of antibody-drug conjugates. With the breakthrough of key technologies, the antibody-conjugated drug finally broke out of the cocoon into a butterfly and was approved one after another.

The speed at which these new molecular treatment modalities are emerging is not only due to breakthroughs in research and development bottlenecks, but also reflects their advantages in treating diseases.

The advantages of new molecular therapy modalities in treating diseases are manifested in several ways. First, they can be used to target targets that traditional treatment modalities cannot, such as gene therapy, antisense oligonucleotides (ASO) and RNAi therapy in diseases where disease-causing genetic mutations have been identified For a long time, but they cannot be targeted with traditional small molecule or antibody therapies, new treatment modalities provide new means to target these targets.

Even for targets that can be targeted by traditional treatment modalities, new treatment modalities can provide safer, more effective therapies that benefit more patients. This is fully reflected in HER2-targeted therapy, and multiple ADCs targeting HER2 have shown excellent efficacy. Recently, Enhertu, jointly developed by AstraZeneca and Daiichi Sankyo, provides HER2-targeted therapy options for breast cancer patients with low HER2 expression for the first time.

Second, multiple new molecular therapeutic modalities have a programmable modular design approach, which means that as the technology platform matures, they can be tailored to different targets within a relatively short period of time. , replacing modules in therapy design to rapidly develop targeted therapies. For example, RNAi therapy and ASO therapy both produce therapeutic effects through complementary binding to mRNA sequences. By changing the sequence of oligonucleotides, new therapies can be developed for different targets.

At this year’s WuXi AppTec Global Forum, Laronde CEO Dr. Diego Miralles stated that this programmable therapy development is an important driver for improving the R&D efficiency of the biopharmaceutical industry One of the powers.

These programmable new treatment modalities also offer hope for rare disease patients. Many rare diseases are caused by rare genetic mutations in genes, and they have very few patients, or even only one patient in the world. ASO therapy can prevent the expression of toxic proteins by binding to specific RNAs, or alter the splicing of mRNAs to generate functional proteins. Dr. Stanley T. Crooke, founder of Ionis, a company dedicated to developing ASO therapies, has established the n-Lorem Foundation to work with academic institutions and industry partners to develop personalized ASO therapies for patients with ultra-rare diseases.

Cell therapy and gene therapy also offer the possibility of “curing” a disease with a one-time treatment. This year, Emily Whitehead, the first pediatric patient to receive CAR-T therapy, has been cancer-free for 10 years. In a paper published in the academic journal “Nature” this year, a team led by Professor Carl June, a world-renowned CAR-T therapy expert, found that two adult patients who received CAR-T therapy have also been cancer-free for 10 years. He stated: “Based on these results, we nowIn conclusion, CAR-T therapy can really cure cancer patients. ”

Data from a clinical trial of the recently approved gene therapy Upstaza in the European Union also showed improvements in motor and cognitive function for up to 10 years after a single treatment. They make possible the ideal of “one-time treatment, life-long benefits”.

More new molecular treatment modalities are also emerging. For example, CRISPR gene editing, a breakthrough discovery that won the Nobel Prize, spawned the in vitro gene editing therapy CTX001 >It is expected to submit a regulatory application this year, becoming the first approved gene editing therapy. An in vivo editing therapy developed by Intellia Therapeutics has also shown curative potential. mRNA technology is expanding into other areas of infectious disease and oncology following its success in the development of a Covid-19 vaccine.

Regulators around the world have also recognized the potential of new molecular therapeutic modalities and have provided multiple guidance and accelerated development measures for their development. For example, the 5-year analysis report on PRIME designation issued by the European Union recently showed that advanced treatment drugs including gene therapy and cell therapy received the highest proportion of PRIME designation.

According to the WuXi AppTec database, 23 therapies and vaccines based on new molecular treatment models have been approved by the US FDA in the past 3 years, approximately before 2019. 150% of all such therapies. These data show the trend of a surging wave of new molecular treatments. We look forward to the advent of more innovative treatments as soon as possible to benefit the majority of patients.