The Ebola virus has raged in Africa for nearly 50 years, with more than 30 outbreaks since it was first detected in Zaire and Sudan in 1976 , causing tens of thousands of deaths, with a fatality rate of up to 90%. Africa is still at risk of an Ebola outbreak.

Fortunately, the research on Ebola virus by scientists all over the world has not stopped. The development of small molecule drugs that can effectively inhibit Ebola virus has always been an international hotspot and difficulty.

Today, a Chinese research team published a paper in the top academic journal Nature, analyzing the three-dimensional structure of Ebola virus polymerase for the first time, revealing the molecular mechanism of its work /strong>. At the same time, this work also discovered the mechanism by which a century-old drug, suramin, inhibits the activity of Ebola virus polymerase.

This result provides a candidate treatment option for the prevention and control of Ebola epidemic, and also provides a new target and direction for the development of anti-Ebola virus drugs. Shi Yi and Gao Fu from the Institute of Microbiology, Chinese Academy of Sciences are the co-corresponding authors of the paper.

The research team pointed out that the transcription and replication process of Ebola virus genome is completed by the complex formed by viral polymerase L protein and other accessory proteins. Since the polymerase complex is highly conserved among different filoviruses, it is an ideal target for the development of broad-spectrum antiviral drugs.

But whether it is the structural optimization of existing polymerase-targeting drugs or the development of new drugs targeting conserved polymerase sites, there is an urgent need to understand the replication mechanism of Ebola virus , elucidating the molecular basis of its polymerase function. However, Ebola virus polymerase has a large molecular weight, is unstable, and is easily degraded. These factors lead to the analysis of its three-dimensional structure has always been a worldwide problem, which severely limits the development of drugs targeting the polymerase. . Structural analysis found that polymerase L protein of Ebola virus forms a stable complex with VP35 protein tetramer, and its polymerase activity domain and add The cap domain is similar in structure to other polymerases that are both non-segmented negative-strand RNA viruses, such as respiratory syncytial virus (RSV) and rabies virus (RABV), indicating that non-segmented negative-strand RNA virus polymerases have evolved in the process of evolution. is conservative.

The research team noted that the N-terminal domain of Ebola virus polymerase has a filovirus-specific insertion domain, and it is The polymerase is essential for its activity and can be a potential antiviral drug development target.

Viral polymerases involve a variety of conformational changes in the production of progeny RNA, the most important of which is the transition from the initiation state to the extended state . In this work, the researchers captured the fine structure of the Ebola virus polymerase in the extended state by changing the sample preparation conditions of cryo-electron microscopy, and confirmed the key structural elements of the enzyme activity center through structural comparison analysis. How conformational adjustments occur in the extended state to facilitate smooth product synthesis. 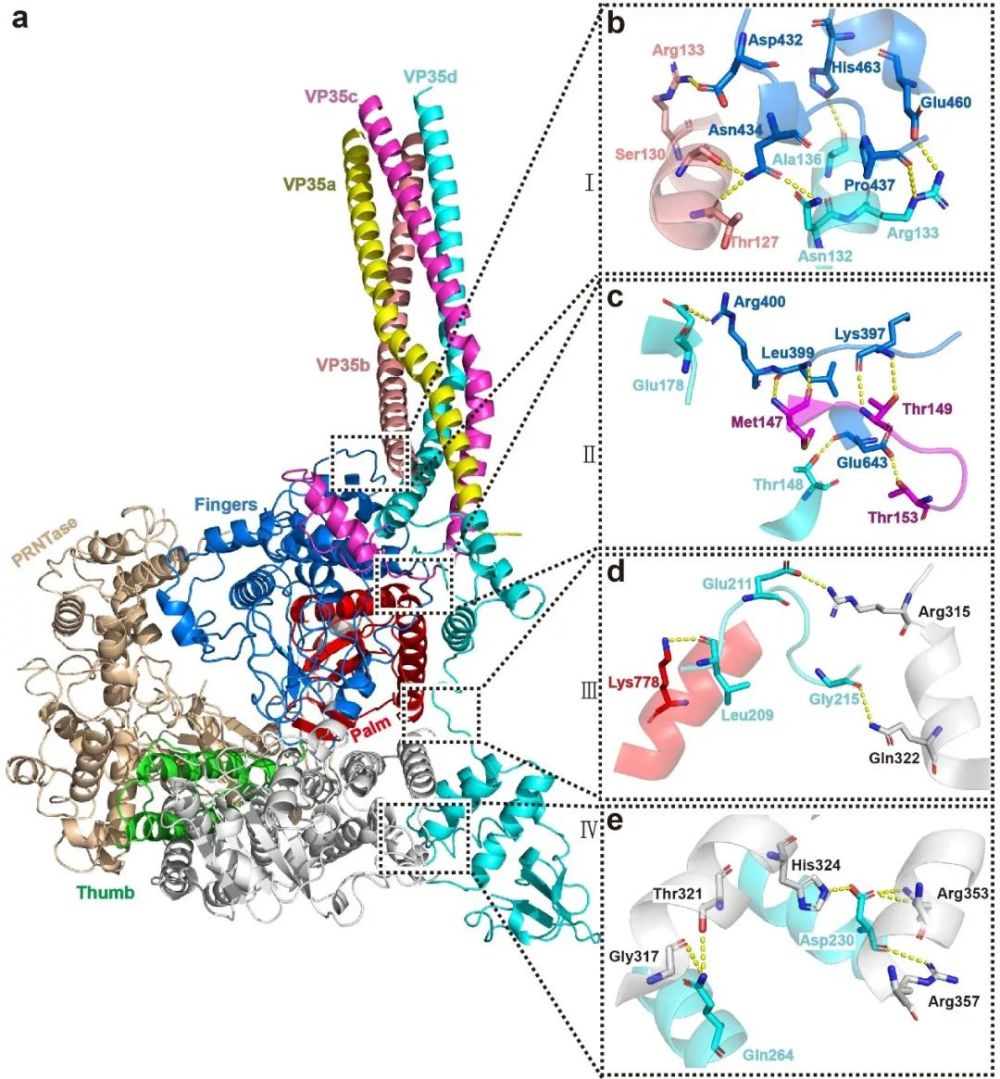 More than 100 years ago, a drug called suramin was discovered to treat parasitic diseases such as African trypanosomiasis sleeping sickness. After the Ebola outbreak, some studies suggested that suramin had good anti-Ebola virus activity in vitro, but the exact molecular mechanism was unclear.

In this study, scientists found that suramin can effectively inhibit the activity of Ebola virus polymerase through in vitro enzyme activity and cell replicon experiments, and further used cryo-electron microscopy technology. The complex structure of Ebola virus polymerase and suramin was analyzed, revealing that Suramin exerts its inhibitory effect by binding to the NTP entry channel of the polymerase, preventing the substrate from entering the enzyme activity center .

The molecular details of the interaction between suramin drugs and L protein provide key reference information for further modification and optimization of suramin drugs. In summary, this study is the first to analyze the structure of Ebola virus polymerase, clarify the molecular mechanism of its progeny RNA synthesis, and clarify the unsegmented negative-strand RNA The dynamic changes of the virus from the initial state to the extended state during transcription and replication have laid a key theoretical foundation for understanding the replication mechanism of Ebola virus at the molecular level.

At the same time, this work found that suramin can effectively inhibit the activity of Ebola virus polymerase by inhibiting the entry of NTP substrates into the enzymatic activity center, which not only provides information for the prevention and control of Ebola epidemic It also provides new targets and directions for drug development against Ebola virus.